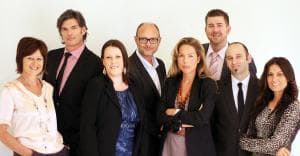 The agency will open its doors on the 11th January, offering media, digital creative, direct and strategic services with eight partners on board.

Former Mindshare associate partner Kirsty Muddle will take on the role of head of media strategy, former national studio manager of Cummins & Partners, Steven Tortosa, will be creative services director and Faye Collay, the former senior digital producer of Sapient Nitro, joins as head of digital. Jeffares stepped down from Wunderman last week after four years at the agency.

Cummins takes on the role of executive director and Ross will be executive creative director. "We all have a share in the agency," said Cummins. "Its not just going to be about me."

"What is exciting for us is the ownership and commitment that this star-studded line up is showing to each other. We have - literally - bought in to the simple ideal that all aspects of the advertising and communications function should be in the one place. No fiefdoms, no silos, no divisions. And clients will benefit from this," Ross added.

Ross, who resigned from CHE in September, and Cummins, founder of Cummins & Partners in 1997 and former Sapient Nitro CEO, previously worked together early in their careers while at Mojo where they developed the "Every piece of Victoria" campaign for Tourism Victoria.

"We always knew we would do it because we got on so well, created brilliantly together and most importantly launched new campaigns together that have stood the test of time," Ross said.

"We started talking about what we have called the 'New Advertising'. It's not just about digital, social media or all the journalese in the industry currently.

"It's about a new era in advertising that is more personal, more relevant, more global, operates in real time - that means faster and cheaper - and is powered by constantly evolving technology" said Ross.

Cummins said the agency would focus on collaboration. "Specialists are ruining the industry and bringing down the standards of work. By definition "specialists" are not collaborators."

The agency currently has no clients "but we have a lot to offer so we hope to start fast", Ross said. Cummins Ross, which will have its initial presence in Melbourne's St Kilda, also plans to have an offering in Asia within 12 months.

"This may come from our own investment, or we may strike an alliance with a network that shares similar ambitions. We have chatted with a few and we have had some amazingly vibrant positive conversations."