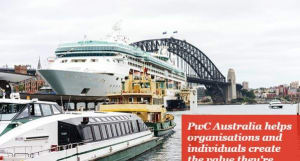 Big companies Down Under haven't got the appetite to “cannibalise themselves” and Australia lacks a “competitive cauldron” to commercialise innovation, according to insights in the latest PwC Australian Entertainment and Media Outlook Report.

PwC also asked prominent media and marketing figures what they see coming down the track for innovation Australia.

Ex-CMO at music disruptor Kazaa, now 'entrepreneur in residence' at Telstra's Muru-D startup accelerator, Mick Liubinskas, argued that the quality of innovation in Australia was “quite good”, but said the ability to convert that into commercial success is more varied.

“In Australia we are a large geography but a small population, so the geography fools us to think we are a big market. New Zealand creates more $100 million businesses than we do because they don’t spend 10 years trying to qualify their domestic market, it's too small. Israel is the same.”

Co-founder of CEO of Paloma Mobile, Jennifer Zanich ,said while growing, Australia could do a lot better with funding opportunities with startups. She also said “complacency” was an interesting issue.

“In Australia it's not that we don't have the technical chops or the entrepreneurs with ambition, but we lack a competitive cauldron,” she said.

“I lived I the belly of the beast in Silicon Valley for a decade and you can taste the competitiveness. You are always striving to do better, hire a better team, solve a bigger problem, work longer.

“In Australia we really lack that; our entrepreneurs need to be in more of a competitive environment to help push and strive and solve bigger problems.”

Co-founder of Champ Private Equity, Joseph Skrzynski, whose company has invested in several disruptive companies and tech such as Ooh!Media, Datacraft and Seek, said what's happening overseas in technology is coming through in Australia – clever algorithms around big data analysis applying to marketing, applying it to customer insight, but that there is too much 'managing risk'.

“Big companies haven't got the appetite to cannibalise themselves, they have the internal antibodies for change.”

“It's annoying when discussing a new idea and the first thing anyone thinks of is a problem, 'We can't do that because...', but often it can be done, it's just our culture that inhibits business.”

Despite some of the warnings that the sector needs to innovate in order to ready for the looming challenges, there is a plethora of takeaways an advice for sections ranging form freer-to-air TV, out-of-home, mobile, music and radio.

Keep an eye on AdNews for more on the report.