Retailers brace, but consumers more than ready for Amazon

Amazon’s imminent arrival on Australian shores is ramping up with 75% of Australians aged 18+ saying they are interested in Amazon Australia.

The new research from Nielsen Omnibus research show that, as expected, the online retailing giant, is set to shake things up in the Australian retail jungle when it launches in September 2017.

The report shows that Amazon’s US site converts almost one-in-two (49%) Australian visitors into sales - the fourth highest behind eBay (78%), The Book Depository (74%) and The Iconic (53%).

A total of 56% also said they are likely to purchase from its Australian site and 45% said they would pay to become an Amazon Prime member to receive special deals, discounts and delivery perks.

A spokesperson from Nielsen said Amazon’s arrival presents clear benefits to consumers with access to more diverse online retailing options, adding that consumers will continue to embrace the digital landscape for research and purchasing and it is now increasingly important that retailers make their online experience transparent, with easy access to information.

“Value, personalised customer experience and convenience will all be key to success,” a Nielsen spokesperson said.

“While still relatively small in this market, online shopping continues to grow from strength-to-strength.

“You only need to look at the development in shopping websites to see this playing out: customer experience, delivery options, and the general morphing between bricks and mortar online - with services such as Click & Collect.” 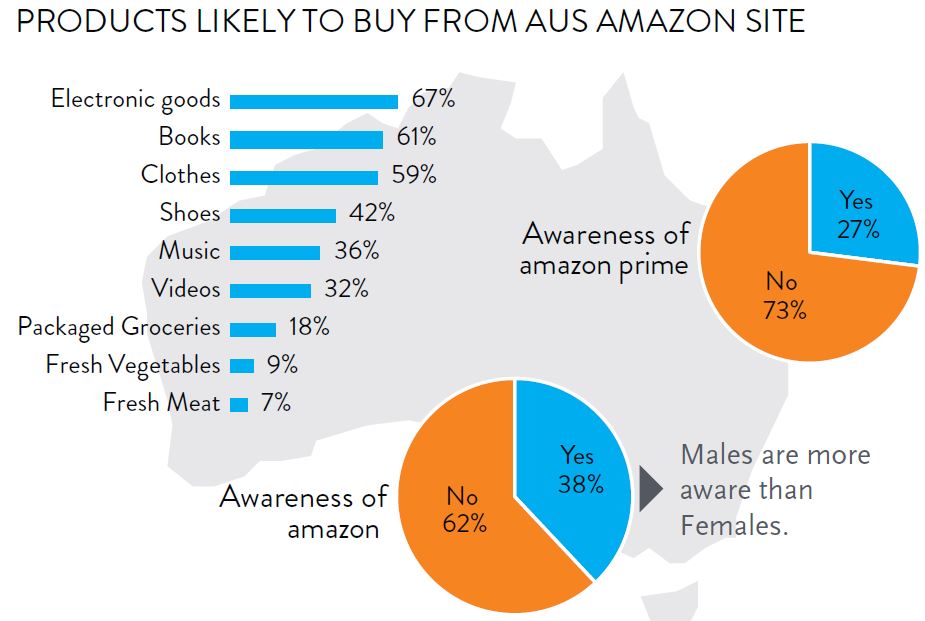 In December Amazon Prime Video officially launched in Australia and across 200 countries. The global SVOD giant now offers Australians access to Amazon Original Series The Grand Tour, Transparent, Mozart in the Jungle, The Man in the High Castle and most children’s series like Creative Galaxy, Gortimer Gibbon’s Life on Normal Street, Tumble Leaf and Wishenpoof.

Amazon is also set to cause a stir particularly around its food venture, with talks of it offering a completely new grocery shopping experience in the way it integrates physical stores with online ordering.

In November Woolworths addressed the imminent threat from Amazon by forming a task force to take on the US online retailing giant when it launches in Australia. At its annual meeting with shareholders it said the team will be different to that which competes with Coles and Aldi, and was established solely to respond to Amazon.

Late last year Amazon revealed a sneak peek at its bricks and mortar grocery proposition, Amazon Go. The first Amazon Go store will open next year near the company’s Seattle headquarters, and will not feature checkouts or queues. Instead, shoppers will scan into the store with the Amazon app on their mobile, get tracked as they walk through the store and pick up purchases, while the bill for basket of groceries will be automatically docked from the customer’s account. The concept is literally, ‘pick up and go’.