Regional newspapers: Don't keep us in the dark 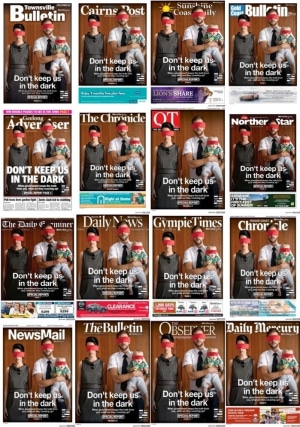 News Corp Australia’s regional titles today ran with the same front page highlighting excessive secrecy by governments to stop journalists from telling the public what they are doing.

The headline "Don't keep us in the dark" was published in regional Queensland, NSW, the Northern Territory and Victoria. In Hobart, The Mercury also produced a front page exposing local government secrecy.

"These front pages send a powerful message that Australia's media is standing up for the rights of all regional Australians to know what their governments are doing," says News Corp Australasia executive chairman Michael Miller.

"The Right to Know campaign is important for our industry as a whole but it's much more than that. Governments of all levels - local, state and federal - too often exploit what they perceive as a lack of scrutiny outside of mainland capital cities to take questionable decisions and actions."