AdNews takes a look at how the radio scene is shaping up in key metro markets for the fifth radio ratings of 2017. This survey five period is from 28 May to 1 July and 16 July through to August 19. In case you missed it you can see Survey Four “Radio ratings: Smooth wobbles; Rusciano gains - but enough?” here. We are over the halfway mark now, with the final ratings, survey eight, due out on 19 December.

In survey five, Nova Entertainment's Smooth FM station has been knocked off the top spot for total listeners across the Sydney market's commercial music FM offerings.

It had reigned supreme in overall listeners across the city for the last three surveys, but now, its closest competitor Australian Radio Network's (ARN) WSFM station has pipped it to the post. WSFM last claimed the top spot back in survey one.

The ratings now show WSFM sitting comfortably at the top with a 9.3% share of listeners. In second spot ARN's sister station Kiis 106.5 claimed an 8.4% share, third place goes to Smooth FM with its 8% audience share, and then Nova 96.9 with a 7.9% audience share.

Smooth’s significant drop of 1.1 percentage points, from a 9.1% audience share to its current 8%, suggests it has some work to do to clamber back up to its top spot for survey six.

Australian Broadcasting Corporation’s (ABC) Sydney, which now often ping-pongs between second and third spot overall, has bounced back to third position with an 8.5% share of total Sydney listeners. It did have a 9.5% share in survey four.

Em Rusciano Radio Show is on the up; WSFM continues to dominate

Focusing back on the FM breakfast slots across Sydney, Kyle & Jackie O on ARN’s Kiis 106.5 yet again holds the top spot. The pair have stayed flat with a 10% share, showing they still have a firm and steady grip on Sydney breakfast.

They are yet to hit the great heights of the 10.5% share they scooped in survey one.

Not content with its overall listener win, WSFM again knocks Smooth FM out of the way. It scooped an extra 1.1 percentage points to earn an 8.9% audience share in breakfast.

Smooth instead lost 1.3 percentage points, dipping to a 6.3% share and fourth in the FM breakfast stakes. In third spot was Nova's 96.9 which stayed flat with a 7.8% share in breakfast.

SCA’s Sydney 2dayFM breakfast spot, The Em Rusciano Radio Show with Harley Breen, has again climbed. It now holds a 3.6% share, compared to its 3.3% share in survey four and a 3.1% share survey three. Good news for SCA as the show closes the gap between itself and its axed predecessors Rove and Sam, who were cut due to poor ratings. In survey five 2016, Rove and Sam took home a 4.1% share.

Looking at the entire radio landscape across breakfast, 2GB takes out the most listeners across Sydney, with a lofty 14.9% share, followed by ABC Sydney with an 11% share.

Hamish & Andy 2DayFM's national drive show, which pulls a far bigger audience in Melbourne compared to Sydney, climbed 0.3 points to claim a 6.8% share – much better than its survey three 4.8% share. 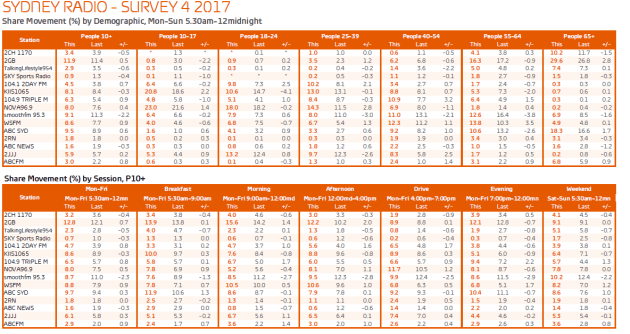 In the Melbourne market, Nova’s Smooth FM (9.5%) took over Fox FM (8.8%) for the highest share of total audience of the commercial stations. Nova’s 100 fell into fourth place with an 8% audience share.

In drive, Fox FM’s Hamish & Andy saw a significant 2.6 percentage point decrease, but maintained its top spot in the FM band. However, 3AW on the AM band was the most listened to station this survey with 12.4% audience share.

Fox also held the top spot in breakfast with the Fifi, Dave, Fev and Byron show taking a 7.9% share – a 0.9 point decrease from the last survey. 3AW has by far the greatest share of breakfast listeners with a 20.5% share.

Nova closed in on Fox’s dominance, with 7.8% share, up from 7.3%. It started the year with an 8.1% share – Melbourne's largest breakfast audience on the FM band. 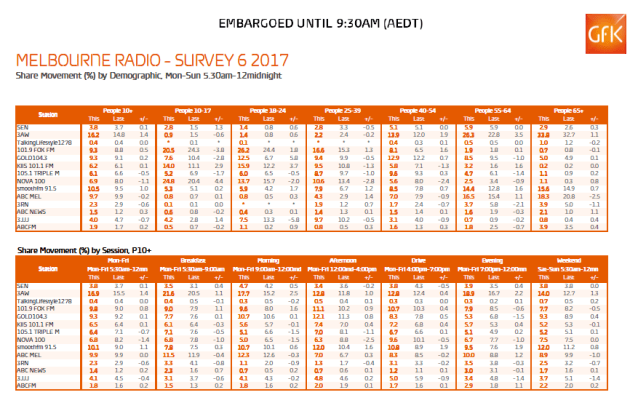 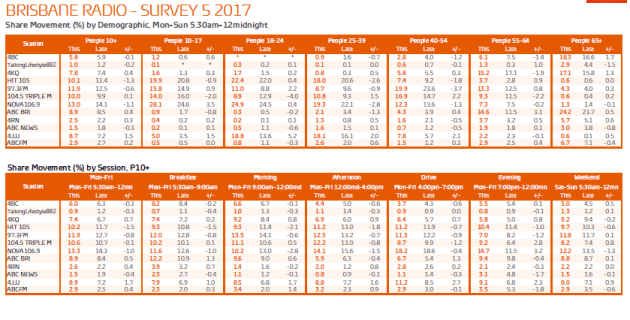