Pernod Ricard in global push to reunite media and creative 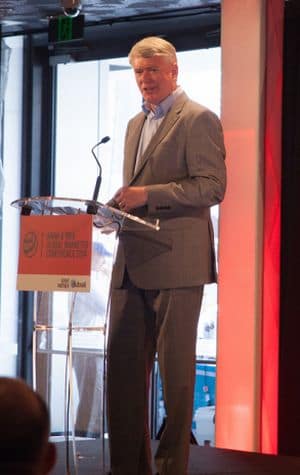 French spirits giant Pernod Ricard says the cycle has turned, the usefulness of the big agency groups and holding companies is under scrutiny and media and creative disciplines need to get back together.

As momentum gathers for a correction in the unbundling of media and creative agencies, which started more than 15 years ago, Martin Riley, Pernod Ricard’s Paris-based global marketing boss and president of the World Federation of Advertisers (WFA), told AdNews the company was at the start of a global strategic review for how it can forge closer ties between its media and creative partners and break down the silos between the two disciplines.

Absolut, Jameson, Chivas Regal and Jacobs Creek are among the company’s brand portfolio.

Riley said the unbundling of media and creative in the 1990s might have run its course and that volume and price efficiencies were only part of a new game that required media planning to be much closer to creative development.

“You need real media planning capability within the creative agency,” Riley said. “It’s really a strategic issue. You can’t divorce it from the content and the creativity. I think the whole media planning aspect is a strategic one and it needs to be pulled right back into the initial upfront discussion.”

When asked whether the split between media and creative agencies was proving counterproductive in a fast moving world of channel proliferation, Riley said: “I think what’s happened is people have got too concerned about the buying element, CPM’s, efficiencies and all the other measures and we’ve lost a little bit of the planning element. You need to have that planning discipline joined to creative development, which is there to solve business objectives, whether its short term, medium or long term.

“As far as our business is concerned, globally and within our business units because we’re very decentralised, we’re actively looking at this right now.

“Personally I’m quite uncomfortable at the moment that it’s to separated. It’s too much in silos.”

Riley also raised questions about the attraction of pure scale plays among the large ad networks and communications holding companies.

“There’s pressure on the big global communications groups. We’re at a very interesting stage with the whole agency-client relationship and what agencies are allowed to do,” he said in a move certain to heap pressure on the structures of he global firms.

Riley’s position as president of the WFA wields significant sway among its member brands, which account for around $700 billion in global ad spending. “The big global groups - there are questions about what is the specific added value they bring by being so big when as we heard from John Hegarty [at the AANA-WFA Global Marketer Conference in Sydney last month] that people can do start-ups, people can actually begin businesses with relatively small amounts of money. It’s technology that’s allowing this to happen.”

Riley said Pernod Ricard was also exploring bringing some media planning expertise inside the company. “We’re considering whether we should have some in-house expertise on media which may be in Paris.”

Riley acknowledged the unbundling trend was fueled by corporate marketers looking to extract price advantage and efficiencies from scale but industry dynamics had changed because of technology. “We were in a phase of being very quantitative in our assessments,” he said. “I think now it’s much more of a qualitative assessment because you’re not necessarily going after everybody. It depends of course on your brand and what you’re trying to do but people are much more specific about the kind of targeting they want. They’re much more specific about the kind of insight and understanding of how people consume different parts of media and how they connect it.”

Riley said he was also conscious about the risks associated with the rush to find metrics and ROI measures around digital media which sometimes missed real opportunities in channels without granular data.

“There’s a real risk that because we feel we can measure it we feel more comfortable,” he said. “And it’s a little bit of lazy marketing because we know you’ve got to have the balance. There's a logic telling you that if people are paying $6 or $8 for a magazine they’re doing it because they find some value in it. They like it. The way they are consuming media is probably different than if they’re just scanning something online and I think that’s something we’ve got to understand.”

The need to bring media and creative back together - whether through closer collaboration or a truly full service model - will be one of the key themes at the Media Sales Summit, held 22 May at Royal Randwick. Henry Tajer, Rob Morgan and Sean Cummins will be some of the industry bosses giving their views on the subject. For details and tickets, click here.