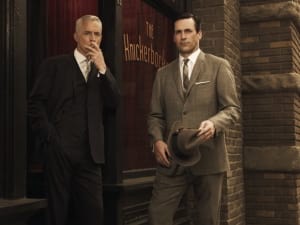 When I recently looked up the website of a new creative agency called Limeworks, I was intrigued by the fact that the principals were both wearing lime green outfits while the staff were uniformly attired in black. It got me wondering if we’re seeing a return to powerful and unique fashion statements by advertising professionals.

When I entered the advertising industry back in 1958, the dress code was very conservative. As I recall, even the writers and art directors at my first agency wore suits, and collars and ties were de rigueur at all levels.

The managing director had very restrictive views on dress, and I remember one young account executive being warned not to wear bow ties to the office because the boss didn’t like them. Another young account executive, who was a particularly sharp dresser, was accused by the managing director of being over dressed, and looking like a tailor’s dummy!

The conservative and unrealistic advertising environment of the 50’s was reflected in the recruitment policies of the giants of the London scene like J Walter Thompson and McCann Erickson, who for many years only took on trainee executives from either Oxford or Cambridge – a very odd saga in a 100% talent based industry in which background and social status have never been an issue.

That old school tie mentality disappeared completely from the London agency scene during the creative revolution in the '60s and '70s, and at the same time many of the younger generation of admen started to realise that cultivating a colourful and consistent personal image could be good for business – reflecting as it did a successful and well accepted advertising philosophy.

David Williams (of David Williams and Partners) always wore the same midnight blue suit every day – enhanced by a carnation in the lapel, white shirt and conservative dark red tie. Nothing terribly exciting, but his strategy was clever. He promoted the consistency of his dress by claiming that it meant he had one less decision to make during his action packed working day!

At a more flamboyant level, Peter Marsh (of Allen Brady & Marsh) became famous for his white suits while Ronnie Kirkwood was into heavy makeup, rather like David Bowie. But in contrast, the fastest growing agency of the 70’s, Saatchi and Saatchi, didn’t go in for eccentric fashion. In fact, the bespectacled Maurice Saatchi looked more like a rather dour accountant than an advertising man. Maybe it was deliberate – possibly inspired by the fact that David Ogilvy conquered Madison Avenue with his sober image of a sturdy reliable pipe smoking Scot sporting very traditional tweed suits.

But to get back to the showmen, Frank Lowe – the driving force behind one of Saatchi’s major rivals Collett Dickenson and Pearce – came to work in a black leather jacket. It probably reflected his tough North of England background, which was also evident in the T Shirt he wore underneath. A row or argument with either clients or colleagues prompted the leather jacket to be opened revealing ‘F*** Off’ on the T Shirt.

Did all this daring fashion and high profile showmanship pay off? Apparently so, because Allen Brady and Marsh got on to the short list for British Rail – the biggest single account move of the 80’s in Britain – and they won the business.

Similarly, in the 70’s a relatively unknown hot shop secured a major slice of business from British Leyland. During the pitch the creative director revealed that he had been fired from his first agency for coming to work in Wellington boots. Maybe the same gear helped win over British Leyland!

A lot of the fashion conscious operators in advertising seem to have been men. American superstar Mary Wells clearly knew the value of iconic fashion, but she put it to work for her clients – transforming the image of her client Braniff Airlines by decking out its aeroplanes and flight attendants in stunning pastel colours.

In Australia, Philip Adams has always followed a steady fashion path similar to Englishman David Williams - wearing nothing but an all black outfit all of the time. Whether or not Philip Adams was also motivated by eliminating unnecessary decisions, the fact remains that his consistent sartorial philosophy has created a memorable and unmistakeable impression. And now we have Todd Sampson regularly wearing designer T Shirts on ABC TV’s ‘The Gruen Planet’, making him the most conspicuous and well recognised member of the panel.

If fashion statements are making a comeback, I’m all for it - because in today’s tough and rather sombre economic times, it’s particularly vital that the advertising business encourages more and more colourful eccentrics who think differently. I hope that Limeworks follows in the footsteps of Allen Brady and Marsh, and their fashion statement brings in some really big opportunities.