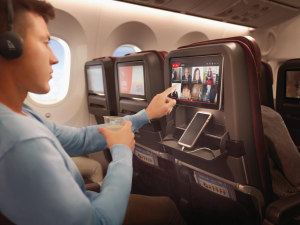 Ooh!Media has secured the advertising rights of Qantas inflight entertainment, enabling advertisers to target travelers from the airport terminal throughout an entire flight.

The deal, a first for an outdoor company, includes advertising rights for video on demand content on seatbacks, Qantas Entertainment App, onboard free Wi-Fi as well as in-flight news bulletins.

Ooh!Media will sell inflight entertainment advertising packages across all TV and movie channels and can be segmented by domestic or international routes and by economy or business class, reaching an estimated audience of 28 million domestic and international travelers per annum.

Ooh!Media has had a partnership with Qantas since 2002 to sell advertising in its airport assets, which domestic terminals, clubs and business lounges.

This new move is estimated to lift Ooh!Media’s airport network audience to around 100 million.

“We've always had the terminals and lounges, the bit that we didn't have was the ability to pull together an entire audience journey,” Dery says.

“All the advertisers we have been speaking to really want to shift to audience buying…the in-flight component allows us to take to market and Qantas audience sell.”

Dery says Ooh!Media can now track around 100 million passenger moments a year, which he says touches “literally every passenger”.

Ooh!Media expects the proposition to appeal to luxury brands for long-term packages, with carmakers, telcos, tech companies and financial services all tipped to join.

Dery believes that long-term partnership packages should reach more than 75% of key buyers within these categories.

“An advertiser can now target a specific audience but for a minimum of two hours plus on their journey. It now enables them to, across multiple touch points, engage with them throughout that journey,” Dery says.

“We think it's a great opportunity to really revalue the in-flight media component.”