NRL cracks the social code for State of Origin 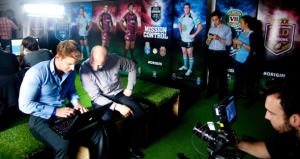 By the time the NRL’s final State of Origin match came around in Sydney on 17 July, Matt Henry and Aden Hepburn were running the NRL’s social media Mission Control centre like they were veterans. It was their third outing in as many weeks. Henry, the NRL’s digital marketing manager and Hepburn, VML’s managing director, had in February met with the folks behind Gatorade’s Mission Control centre in the US to pick the eyes out of Gatorade’s acclaimed project and adapt it for the 2013 Origin series.

The US unit of Y&R digital agency VML had built Mission Control for Gatorade and Hepburn and Henry had an idea to do something large and innovative in Australia. As it turned out, it was very large. And it has provided some critical learnings for the NRL and probably set the current benchmark for sporting codes on how social media can be done during live sport. Even more broadly perhaps, to live TV events, period. Facebook Australia’s Nick Bowditch says it was one of the “most impressive integrations of social platforms that I have seen”.

Bowditch wouldn’t be far wrong. Mission Control was a complex and slick mix of man and machines working together. Social media listening tools like Salesforce’s Radian6 and Klout scores were part of the initial frontline automated technology process which funnelled posts from the most influential Facebook and Twitter users – many being celebrities.

They were then analysed by the ‘catchers’ – or content producers – and escalated to NRL ‘approvers’ who then moved it on to VML’s designers and art directors to create new posts aimed at feeding and fuelling the frenzy of tweets and posts about the game in real time. The average turnaround time for a piece of social creative was about five minutes from the initial catcher brief to distribution.

The whole thing was well oiled – about 25 people all up from the NRL and VML were working in Mission Control – and perhaps most importantly to Henry and Hepburn, it worked. Rather well, actually. In fact, Henry says after his visit to the US earlier this year, where he met not just with Gatorade but with a bunch of major league baseball teams considered to be at the front end of social media deployment for sporting codes and teams, that Australia is nowhere near as far behind other countries as he thought.

The NRL’s numbers from Mission Control look like proving that. Some of the key Mission Control stats include: one billion Origin-related hashtag impressions on Twitter; a single Facebook post from one team on Origin night topped 630,000 people without paying Facebook for sponsored posts; each Origin team’s Facebook account talked to an average of two million unique users; and 116,000 new sign-ups to Origin social accounts over the three games. The NRL is now sufficiently enthused by Mission Control’s success that it will allocate a bigger budget from its ‘innovation fund’ to further resource the digital strategy. And ironically, Hepburn says the NRL’s ‘pop-up’ Mission Control project was an easier task than the permanent fixture of Gatorade’s in the US, despite the need to bring in mobile satellite dishes for each game and the huge interstate logistics.

This article first appeared in the 26 July 2013 edition of AdNews, in print and on iPad. Click here to subscribe for more news, features and opinion.