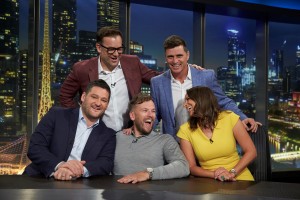 Nine has decided to end its AFL analysis program, the Footy Show after only eight rounds into the current season of the league.

The show had faced tough ratings, slipping below 60,000 in Melbourne and 100,000 nationally in recent times.

It has struggled up against Seven's offering, The Front Bar, which has been performing above average this year, with last night's episode notching up its highest-rated episode for the year, with 428,000 metro viewers overnight.

“It has been a tough decision to end the program that has been such a trailblazer, but sadly the new show has not captured audiences in the way we had hoped," Nine Melbourne managing director Matt Scriven says.

“I want to thank the current hosts, Anthony Lehmann, Neroli Meadows, Dylan Alcott, Brendan Fevola and Shane Crawford, the former hosts of The Footy Show, and the hard-working crew for their great contribution.”

The Footy Show first aired in 1994 and enjoyed a 25-year on-air run before being axed. The show was revamped this year following the exit of former hosts Eddie McGuire and Sam Newman.

“Over the past three decades Nine has led the way with AFL entertainment and news programs and we will continue to do so, with the production of the award-winning Footy Classified and the Sunday Footy Show," Scriven added.

“We remain committed to the AFL and creating great AFL content, and we will continue to focus on new ways to engage audiences who love the code.”

This is the second sporting analysis program to be scrapped by Nine in the last 12 months, with the network elected to ditch the long-running NRL Footy Show.

Australia's sporting commentary continues to diversify across the major networks, with Foxtel taking a dominant position with its programming slate, which includes several nights of dedicated shows across both the AFL and the NRL.