Nigel Marsh has out-of-body experience at South By Southwest 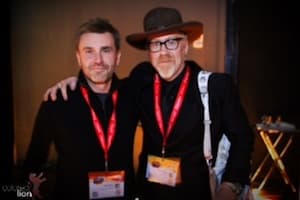 Being in Austin for SXSW has been inspiring, thought provoking and enormous fun – one of the best weeks I can remember. It's not a normal week when you get to name drop that you personally met Seth Myers, Adam Savage, Chelsea Clinton and Biz Stone. Well not normal for me.

It's also a mildly weird sensation for a conference to be front page news in the newsstands you walk past on the way to the conference each day. It's been all 'Lady Gaga this' and 'Julian Assange that'. Definitely got the feeling that for one brief moment you were genuinely at the centre of things.

And the content has been good. Normally I find 90% of the presentations at conferences nausea-inducingly dull and unenlightening, with only 10% worth attending. Here that ratio has been gratifyingly reversed.

However I made a promise not to join the hundreds of people writing articles about the content. The marketing community doesn’t need another one from me. Instead I offer a few personal reflections as I prepare for my own speech here next week. In no particular order:

1. My Grandmother died in the house she was born in. She never lived anywhere else. She travelled outside her county – Devon – once in her lifetime. (To visit London for a day. She didn’t like it.) Her house never had central heating or air conditioning. At dinner parties I tell people how “Granny Vi never even had a fridge!” using her larder happily until the day she passed away. Sitting in the conference hall listening to all the wonderful new inventions I don’t use I wonder if in future years my grandkids will say in hushed tones, “Grandad Nige never even went on Twitter!”

2. People wear Google Glasses. Not just as a joke or for a bet. They actually wear them, for real – and walk around the streets whilst doing so. What’s more, in one of the early presentations the speaker asked members of the audience to stand up if they would be prepared (if the technology existed) to have their mobile phone implanted in their arm or hip. And here’s the thing – fully 40% of the audience got to their feet. Get used to it, people – the robots are coming. Whether you like it or not.

3. I used to think New South Wales’ ocean pools were one of humanity’s greatest inventions. Until I visited Barton Springs Pool. Oh. My. God. Google it. Move past the fact that Robert Redford learnt to swim there – just look at the place. I loved it so much that I felt slightly unfaithful doing my early morning swim there as opposed to at Bronte pool, my long-time love.

4. I don’t care what the figures or the media pundits say – TV has lost none of its power. The sessions that were the most over-subscribed and had the biggest queues were for the speakers who were famous from TV. I mean much as I love The Late Show – Seth Myers? Seriously? He was great by the way. But he’s a comedian from the TV, not a hipster with an internet start-up. People were clamouring to get into Seth’s session. And Adam Savage’s. And Mindy Kaling’s. For better or worse, old-school above-the-line fame is still the yardstick by which many judge real success.

5. I had the out-of-body experience of watching the co-founder of Twitter (Biz Stone) tell an adoring audience that he had redefined what being successful in business means. He said you have to have three parts:

The reason I say ‘out-of-body’ is I said, and wrote, exactly the same thing 10 years ago. But to be fair I have to admit it does sound a whole lot more impressive coming from a billionaire.

6. It's not fashionable to say it but here goes – no matter how bright and shiny the latest new things are there is a danger they give the illusion of connection, not real connection. I bought a coffee from a Starbucks in Austin this morning. Not downtown Austin but suburban Austin. Every single customer (all 16 of them, I counted) were hunched over their personal electronic devices for the entire time it took me to order and pick up my drink. No one even looked up. Which is fine, I only wanted a coffee. However what it is to be human doesn’t change. We all want to belong; to be loved; to matter; to not die alone. If you haven’t attended to the basics and sorted out some real meaningful offline connections in your life, no amount of Tinder, Jelly or Twitter is going to fill the void.

Talking of the important things, I got Adam Savage’s autograph for my younger son. I know he'll be thrilled – he watches him on TV.