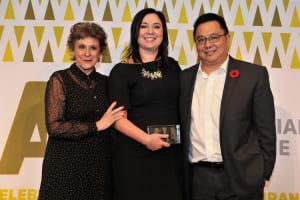 Nicole Sheffield, CEO of NewsLifeMedia and MD of News DNA was today (11 November) inducted into the Australian Magazine Awards Hall of Fame. She joins a pedigree of magazine industry luminaries recognised for their contribution to the industry including Donna Hay, Jackie Frank and Ita Buttrose.

Few women have transcended the glass ceiling of an industry dominated by the patriarchies of the Stokes, the Packers and the Murdochs, like Nicole Sheffield.

After gaining a law degree, Sheffield began her publishing career at PMP Communications, now Pacific Magazines, and has stints at Telstra Big Pond and Foxtel on her CV. She was the driving force behind the launch of titles including Famous and Total Girl and now leads News Corp’s NewsLifeMedia.

Her big break came at PMP when she was offered the role of publisher for K-Zone, Total Girl and Girlfriend, taking on the magazines after successfully running the digital. She admits she “didn’t know anything about magazines” then, but she certainly does now.

“I was seven months pregnant when I was asked to be the publisher of youth and lifestyle titles. The CEO didn’t really understand what I did, but he trusted me. He thought I was crazy – he wasn’t the first and he won’t be the last,” she said.

“Magazines create the most important content and whether we’re in paper, digital or devices, the distribution platform is irrelevant … it’s journalism people are paying money for because they value it.”

When PacMags was bought out by Seven West Media and its digital assets became part of Yahoo7, she headed to Foxtel to lead its lifestyle channels. After four years she re-entered the magazine realm as CEO of NewsLifeMedia where she has been CEO for five years, before expanding her role to lead newly formed News DNA, which houses the publisher’s digital assets.

Behind her career is an unassailable passion for content.

“I realised my passion wasn’t technology or e-commerce, my passion was the content. When I’m passionate about something I’m even better. If I’m not excited – it’s just a job. When it becomes a passion, when it’s something that keeps me up at night and it’s the first thing I think about when I wake up, to me that’s far more exciting.

“Let’s be honest, disruption is now the norm, we have to suck it up, so it’s got to come back to having passion.” Sheffield is one of the most senior women in Australian media and as the woman in charge of prestigious magazine brands including

Vogue, GQ and Donna Hay, a mother-of-four, IAB chair and director of and chair of marketing and communications of Chief Executive Women, you could say she wears a few hats. But she is the first to tell you that you can’t do it all.

“I don’t believe you can do it all. You can have it all, but you’ve got to accept you can’t do everything yourself. The pendulum swings – sometimes I’m a great mum and sometimes I’m shitty at work and vice versa. But occasionally it swings to become even. I try not to beat myself up about it, I like to be busy,” she says.

With gender diversity at a senior level seriously lacking and the media industry losing employees to startups, Sheffield makes time to focus on mentoring the next generation as well as advocating for women in the workplace.

“I believe women leaders need to enable women leaders and we need to support the next generation. Who knows what job you’ll take next or how long you’ll be in the industry. I’m sick of losing technologists to Silicon Valley startups and people in media thinking they are second class citizens – they are the ones producing content that shapes Australia,” she said.

“There was a time where the media industry wasn’t just seen as a spring board to other areas.”

As Sheffield now takes the helm of News DNA, News Corp’s digital business arm, and continues to steer the company’s video strategy through Unruly and Storyful partnerships, she sees more challenges ahead for the already turbulent publishing sector.

“The next five years will be the hardest and most interesting for the industry, even though we’ve had it pretty tough already,” she says.

“I don’t have a crystal ball but I see a lot more consolidation. Publishers will stop thinking of subscribers, but members they can offer services to that act as a companion to magazines, not a replacement. The way magazines will be distributed and how content is delivered will be very different but magazines are here to stay.”

Previous inductees into the AMA Hall of Fame are: