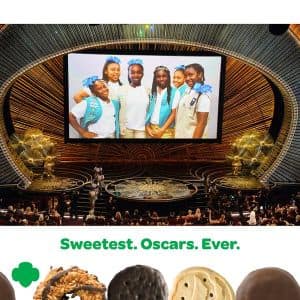 Seven West Media has promoted Warwick Lynch to chief financial officer. Lynch, who has been at Seven for a 20 years, fills the position vacated by current Ten CFO Dave Boorman a year ago. Lynch joined Seven in 1996 and has held several finance roles, including television finance manager, group financial controller and deputy chief financial officer. Prior to joining Seven, Lynch worked with Chrysalis Media Group in London and Ernst & Young.

Content agency Red Engine has secured a new deal with CarsGuide to provide strategic and creative support with a strong focus on social video. It has also moved offices to 100 Miller Street North Sydney to cater for its expanding workforce.

Product placement at the Oscars isn't new, but yesterday's broadcast saw an unexpected brand take centre stage. The Girl Scouts are said to have received $5.5 million (USD) in free advertising exposure according to Digiday, after host Chris Rock brought the Scouts out to sell cookies to the Hollywood crowd in attendance.

The internet was so excited about Leonardo diCaprio receiving his first Oscar, people took to their phones and sent 440k Tweets per minute during the big moment, setting a record for the social platform. Joining Leo in the most buzzed about moments was Spotlight, the film that won best picture, and Mad Max: Fury Road, with the movie taking home six Oscars.