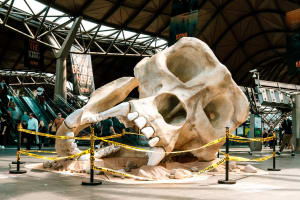 To mark the release of Village Roadshow's new film, Kong: Skull Island, JCDecaux has created its largest ever out-of-home (OOH) brand activation. The six metre tall skull, from JCDecaux Creative and media agency OMD, will preside in Melbourne's Southern Cross Station for the entire month of March. It is accompanied by large scale banners hanging from the roof as well as digital content on large formats screens throughout the station. The immersive activation prompts passers-by to photograph themselves in front of the skull using the hashtag #KongSkull, with the images then appearing on the water tower clock in Southern Cross Station. Kong Skull runs from 6 – 13 March.

A study from radio measurement company GfK has found that metropolitan and regional radio is most engaged with during the hotter months. Released today by Commercial Radio Australia (CRA), the report says that more than 80% of respondents indicated they listen more to radio in summer. Despite the break taken by most regular radio shows over the Christmas and New Year period, GfK shows that 91% of listeners agree that radio is a favoured source of information in summer. A result potentially linked to the fact that holiday audiences have more time to listen.

In honour of International Women's Day, DDB Worldwide changed its name to DDB&R for the month of March. The additional R aims to celebrate Phyllis Robinson, the agency's first female copywriter. The symbolic act could be seen throughout the agency, showing up in meeting rooms, on employee email signatures and on its social media accounts. At present, the changes are only temporary, however DDB says the 'DDB&R' name will remain in meeting rooms in its North American offices. DDB Worldwide has also released a clip on its YouTube channel celebrating the work of Robinson which is running alongside the announcement.