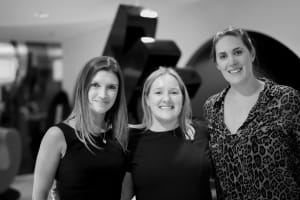 MEC Australia has promoted Philippa Noilea-Tani and Lucie Wombwell to the joint role of Sydney trading director, filling a position left vacant when Claire Butterworth was promoted to national head of investment a year ago.

“Both Philippa and Lucie have solid trading experience and strong relationships with clients and media owners alike,” MEC CEO James Hier says. ”They have been effectively carrying out the duties of Sydney Trading Director for the past few months, so their promotion is well deserved.”

The Festival of Dangerous Ideas is back

The Festival of Dangerous Ideas is back for its eighth year, with the likes of Andrew Bolt, Annabel Crabb and David Marr all taking to the Opera House's stage. The festival is supported by Samsung, and it will see a mix of both internal and local speaks share their thoughts with Sydneysiders in September.

In 2015, FODI sold over 30,000 tickets to the weekend at the Sydney Opera House, with a further 465,000 people engaging through digital content and seven satellite events across Western Sydney, regional Australia and New Zealand. This year’s festival footprint is set to further expand. More than 15 satellite events are already locked in across Australia, to take Dangerous Ideas to the Northern Territory, South Australia and Canberra for the first time.

Sydney agency Pollen has hired Sora Nobari, for the newly created role of client services director to oversee new business growth. The appointment comes off the back of Pollen’s rapid growth over the last year.

Nobari brings over ten years’ experience to the role having worked at creative and digital agencies including R/GA, Pusher, BMF and most recently DDB, where she was executive producer.

At DDB, Nobari contributed to the agency’s remarkable performance at Cannes this year, helping to win eight Lions for the Sydney Opera House #comeonin campaign, including a gold in Mobile.

Atomic 212 has appointed Andrew Lowdon as its new head of SEO. Lowden joins from the UK where he led the SEO, SEM, CRO and web development for search marketing agency Epiphany.

“The Australian market presents some great opportunities for growth,” Lowden says. “There’s a big push on content, which is an essential part of any digital strategy. The SEO channel is strict and unforgiving at times, but you are only there by merit. It offers a great platform to build brands online, through strategic acquisition and retention methods.”

In addition digital revenue reached 37.3% of total net revenue year-to-date, an increase of 23.1% for the same period last year.