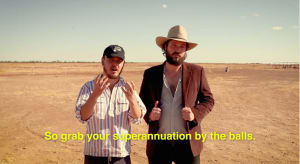 Satirical news site The Betoota Advocate has launched its first branded content on its site, endorsing superannuation fund Grow Super. In the 90-second clip on the publisher’s Facebook, two men calls out flaws in the superannuation system, keeping in the sarcastic tone of Betoota Advocate. Fans have so far responded positively, with one saying it’s the best ad they’ve seen in years.

Nike is bringing back its campaign for LGBTQ causes after announcing a new 'Be True' collection would launch on 1 June. The initiative started six years ago as a an employee-led grassroots program inspired by the benefits diversity can bring to communities and workplaces. It has since grown into an annual campaign centred around new rainbow themed collections which have helped raised around $2.5m in the US for LGBT causes. This year's line will include both footwear and apparel and will feature the rainbow as well as "other prominent symbols of Pride, including the colour pink and the triangle."

Coca-Cola has made detachable bottle labels that work as wristbands for music festivals in Eastern Europe. Created by McCann Bucharest, the wristband came in eight designs and had to be scanned with a specific app to see if it's a winning ticket. Festivals included Transylvania’s Untold Festival. According to Adweek, McCann said the campaign reached 75% of Romanian teens and resulted in a sales bump of 11%.