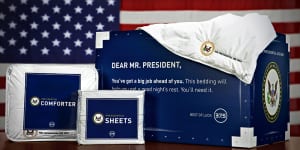 37.5 Technology has designed a sleepwear range just for Donald Trump

An American bedding brand is getting in on the action of Donald Trump’s upcoming inauguration with a new range of Presidential sleepwear. The company begun Tweeting (or trolling) the President-elect with its new “For Presidential Use Only” range of sheets and comforters, encouraging Trump to go to bed early and get off Twitter at 3am.

We're sending you the 37.5 Sleep System @realDonaldTrump. It might inspire you to go to bed early and skip the late-night tweeting. pic.twitter.com/zijVTFixuY

The Project’s Carrie Bickmore is returning to the airwaves as the host of 2DayFM's new drive show on Southern Cross Australia (SCA). She will be joined by Tommy Little, who also features on The Project. The Carrie & Tommy show kicks off from Monday 13 February weekdays from 3pm, before the Hamish & Andy show. Little was previously on Nova, hosting breakfast show Meshel & Tommy with Meshel Laurie, before quitting in at the end of 2015. Bickmore begun her career in radio before becoming the co-host of her own drive show.

Datarati has appointed Jarther Taylor as the new CEO to lead APAC growth across the automation industry. Jarther joins from Telstra where he was the general manager of marketing, in charge of the brand's marketing planning and execution. He also held roles at IBM and HP. Jarther will be replacing the agency’s founder and technology entrepreneur Will Scully-Power who has held the MD for the past eight years.