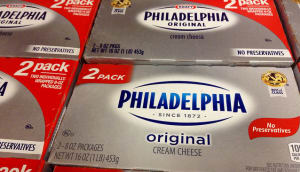 Mondelez is set to offload Philadelphia cream cheese in Europe as part of a $3bn asset sell-off, The Sunday Times reports.

The American food giant transformed its grocery and cheese sector into separate business last year, sparking rumours that it would sell the division. At the time the company denied the rumours. The speculation has now been reignited with a report that Mondelez informed bidders it is up for grabs.

Mondelez split from Kraft in 2012 and the recently merged Kraft-Heinz owns the American rights to Philadelphia cream cheese. It also has the option to buy back the European rights. If not, there’s reportedly a long list of other suitors ready to take the account, including French dairy company Lactalis which is said to be interested.

American activist investor Bill Ackman tipped Mondelez to be the subject of a bid from one of the bigger foods groups, following reports of nine consecutive quarters of slow growth.

Unloading its cheese and grocery division could allow it to focus more on snacks and confectionary, its main business – a move that FMCG businesses globally are getting on board with in an attempt to boost performance.