The publications are broken into 'papers' and 'illustrated guides' with the latter exclusively and beautifully hand drawn by Brooklyn based editorial illustrator Keith Negley.

Each presents a series of broader health and well-being topics around a particular theme, with the first guide exploring the concept of “the heart” from medical, emotional and symbolic points of view as well and the first paper looking at the idea of “kindness”. 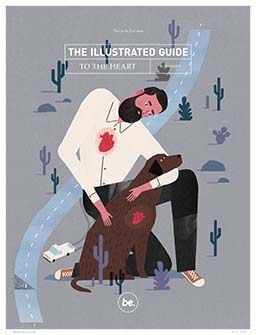 Medibank content marketing manager William Falkingham told AdNews the guides and papers are part of the health provider's wider content marketing publication “Be”, but were developed as part of a more targeted push with its audience base.

He said that while health insurance is important across a wide range of age groups, the 25-40 year old age bracket was “a gap that we had” in terms of content marketing. With insurance being such a life stage product this audience, who would have been engaged with hipster mags Frankie and its male counterpart The Smith Journal when they were first published, was a key target.

“Frankie is about 10 years old so the people who started reading it are now young mums and we wanted to talk to that audience. They’re interested in their health but maybe in a little bit of an esoteric form, not as direct as the Michelle Bridges style of content and maybe a little bit more interested in mental health.”

Falkingham said that when Bannister and Burke left Frankie, Medibank took the opportunity to partner up with the duo and “talk to an audience that probably isn't as turned on by a lot of the other content that is in this space.”

The guides and papers also had a limited print run in cafes and associated health sites like physiotherapist offices which Falkingham said enhances the its message of wellbeing.

“With the content, we’re actually asking people to take a moment to look at a topic and go a bit deeper regarding health, whether it was kindness or the heart,” Falkingham said.

“If you see it at a cafe or read it at home with a cup of tea, it's a really lovely piece to spend some time with and digest the content that way. There is a wellbeing approach to print sometimes that doesn't occur online.”

Falkingham added that with so many brands jumping into the content marketing space, providing a high quality, unique product is increasingly important to cut through the noise. So far, four issues of each illustrated guide and paper is planned but he added that if the publications prove popular it may continue its run.

“Niche publications and niche content has stood up through this era of change publishing change,” Falkingham said.

“Everyone is trying to get into the content space so its importance to deliver things that are of new stand quality and get them to the point where the hold value: not only to your members but anyone who picks them up and reads them.”

The next issues are likely to be launched in March and will focus on the brain and community.