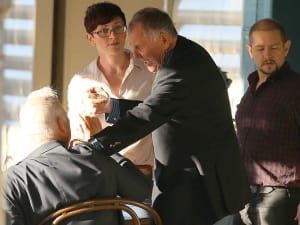 Image from The Daily Telegraph

According to reports, the pair were lunching together yesterday with musician, former Noiseworks singer, Jon Stevens, at Kingsleys Steakhouse in Woolloomooloo when onlookers saw Singleton lunge at Cowin, with restaurant staff attempting to separate the men.

Today's Telegraph included a double page spread of the images, including an image of Singleton standing over Cowin with a broken wine glass in his hand. The paper is reporting that the fight came about after Cowin teased Singleton for drinking rose instead of beer.

The paper also reported that Singleton then “lashed out” at a cameraman who filmed Singleton and Stevens leaving the venue.

In his response to the Telegraph, Cowin defended his long time friend, saying “we were just like bear cubs playing around in a cage”.

This morning, TripleM presenter Matty Johns claimed on his breakfast show, The Grill Team, that Singleton sent him a text explaining the incident.
“Total joke…trying to lighten up the world….Back jacking this one…” the text reportedly read. “A joke gone wrong, gone public, we’ve both been suspended for nine weeks.”
“Life very unfair….my Facebook and Twitter both been blocked.
The altercation follows the recent merger of MRN and Fairfax Radio Network.