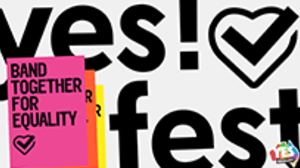 M&C Saatchi has been forced to cancel its Live-Aid style marriage equality benefit concert due to poor ticket sales and issues with corporate sponsorship.

Tickets went offline earlier today, with a message appearing on TicketMaster that they were no longer available online.

“The organisers of YesFest regret to advise that due to unforeseen circumstances, YesFest has been cancelled,” reads a statement on the Ticketmaster website.

“Event organisers and the Equality Campaign are extremely grateful for your continued support and passion for the Marriage Equality campaign. All tickets will be refunded automatically back to the credit card you used to purchase the tickets.”

Advertising for YesFest is still postered across Surry hills

The M&C Saatchi event was being hosted in partnership with Australian Marriage Equality, with Ben & Jerry's, General Pants and Mardi Gras announced as corporate sponsors.

YesFest was announced on 6 October, providing organisers a very tight turnaround for such a major music event to take place.

All proceeds from the concert were to go to the Equality campaign, and the show was also set to be broadcast live on YouTube.

YesFest had gained support from the likes of music legend Elton John, who provided a short video urging Aussies to vote ‘Yes’ in the same-sex marriage postal vote.

M&C Saatchi responded with a statement: "M&C Saatchi would like to thank everyone for their amazing support and passion – from the artists, the brands, the partners and the venues that have been so dedicated to the cause."