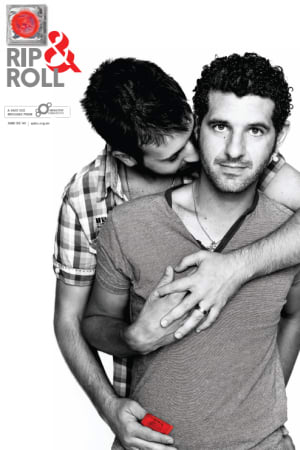 Safe sex campaign by the Queensland Association for Healthy Communities.

The Australian Christian Lobby (ACL) has successfully lobbied for bus shelters ads promoting safe sex within the homosexual community to be removed.

Adshel has removed the ads from bus shelters in Queensland, due to a large number of complaints. The ads are part of the "Rip and Roll" campaign from the Queensland Association for Healthy Communities (QAHC).

Adshel said in a statement: "Adshel responded to a series of individual complaints to the Adshel Office, Brisbane City Council and the Advertising Standards Bureau. All complaints were made by individual members of the public; none were identified as stemming from the Australian Christian Lobby.

"Adshel does not have, and never had, any dealings with the Australian Christian Lobby and has not responded to any requests from this organisation. Adshel has a commercial relationship with Brisbane City Council and commits itself to dealing appropriately with feedback from the community regarding the style and nature of advertising."

"The decision to remove the posters was made on the basis of the large number of complaints received. Adshel does not take a position regarding the views or position of various community groups."

The ads depict two men embracing and holding a condom along with the words, "A safe sex message from healthy communities."

The ACL encouraged the public to submit complaints to the Advertising Standards Bureau. One complainant wrote the ads were, "blatantly and very publicly, promoting to our impressionable youth and children an unhealthy lifestyle choice. It shows two young males in the act of foreplay and to me is encouraging homosexuality."

In a statement on its website, the QAHC has responded to the complaints from the ACL and argued that the campaign is designed to encourage safe sex. The QAHC pointed out that similar outdoor advertising featuring heterosexual couples or individuals did not attract complaints.

It said: "We can only conclude that the objections are based on discriminatory and homophobic attitudes towards gay men. We do not accept stigma or discrimination against gay men to be legitimate grounds of complaint against the ‘Rip & Roll’ advert."

A Facebook event has been created by Michael James, one of the men posing in the ads, calling on Adshel to put the ads back up. It has so far attracted 9,181 supporters.

James wrote on the page that he and his partner of six years were selected by QAHC to appear in the ads. He said: "The aim of this campaign is to promote Safe sex, for gay men, but also for the wider community. We also felt that this campaign and the exposure these advertisements granted would help gain a wider level of acceptance of the gay community.

"This evening Adshel - The company that distributed our adds to bus shelters across Brisbane has removed, without the consent of QAHC, all of our ads. This has been due to Wendy Francis and The Australian Christian Lobby Group. This company has bowed to blatant homophobia and in 2011 there is no place for this."

The ACL has also called for GOA Billboards to remove billboard ads from the same campaign. At the time of writing, the Advertising Standards Bureau has not returned calls.