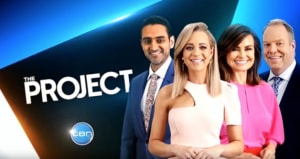 The arrival of new host Lisa Wilkinson boosted Sunday’s episode of Ten’s The Project by more than 200,000 viewers, marking its biggest audience of 2018.

Wilkinson’s high profile exit caused a stir for Nine after the network failed to re-sign the Today Show star.

While the episode pulled strong numbers, it was unsurprisingly unable to beat Seven’s coverage of The Australian Open Men’s Tennis Final between Marin Čilić and Roger Federer.

As the TV ratings period kicks off, last night saw the premiere of Ten’s I’m a Celebrity, Get Me Out of Here.

The episode revealed the Aussies who would fight it out in the Jungle, including ex-Australian idol contestant Shannon Noll, boxer Anthony Mundine, tennis player Bernard Tomic and actor Kerry Armstrong.

The show pulled an audience of more than 1.2 million metro viewers, up on last year’s figures (1.103m).

Federer and Čilić’s match lifted Seven to a 36.7% share, winning the network race. Nine finished with a 19.1% share and Ten hit 16.8%, boosted by I’m a Celebrity Get Me Out of Here and The Sunday Project.

Despite what the naysayers will have you believe, more people are watching more television than ever before – they’re just not watching as much live linear. While AdNews does report on one-off daily TV ratings for certain occasions, such as in this article, we are also increasingly looking at the bigger picture and longer time frame success with TV ratings – incorporating catch-up TV and live streaming. See: It's time to change how we measure success on television.