Lenovo is about to dump $10m on marketing for Australian launch 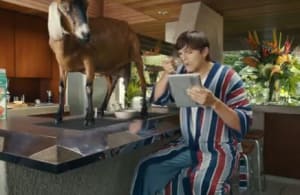 Lenovo is about to dump $10 million on its first major marketing campaign in Australia to launch its consumer business.

The tech brand is using the launch of its Yoga tablet device, which is being rolled out globally alongside the Ashton Kutcher goat milking ad, as the foundation of the consumer launch.

Lenovo has previously only focused on its B2B business in Australia.

Ahead of the launch event in Sydney today (28 October) David Roman, global CMO for Lenovo told AdNews that the time is right for the consumer push here, because the products, the distribution and the brand is right.

APAC CMO Nick Reynolds added that while the $10 million spend is still behind what its rivals invest in marketing, launch is built on a number of principles.

Firstly “going big and loud” on the launch. Secondly, achieving 20% share of voice in the market by focusing solely on the Yoga device as a “wow product”, is key to getting cut through against market dominators Apple and Samsung. Thirdly, it's targeting millennials, which is why the global ads have the seemingly bizarre but highly shareable goat milking.

The final piece of the puzzle is to have a strong retail execution. The Yoga tablet can only be bought online directly with the retailer or at Harvey Norman and JB Hi-Fi, which has installed dedicated Lenovo branded benches, to show it as a premium brand.

By coming out strong and “looking like number one” the brand is aiming to actually become number one.

The brand has visions of Lenovo being number one around the world in PC, tablets, connected TVs and smartphones, as well as other wearable devices. Lenova has launched a fitness band and a Google Glass-style glasses device in China that are likely to role out globally at some stage.

It already claims to be number three in the world in tablets, and with the pending Motorola acquisition, it will become number three in smartphones. In Australia, market share is coming from a very low base, because it hasn't pushed its consumer products, but Reynolds says growth expectations are strong.

“With the internet of things, we can become a world dominating consumer electronics brand. In Australia it's no different,” he said.

Lenovo is also working closely with its two retail partners JB Hi-Fi and Harvey Norman on a raft of above the line spend - on top of the $10 million the brand is investing.

Lenovo will focus its spend on digital and social activity, and says that it's focus is “engaging and interacting” because that reflects the nature of the Yoga tablet and how it fits in with consumer behaviours rather than dictating them.

What do Ashton Kutcher, Lenovo and a goat have in common?