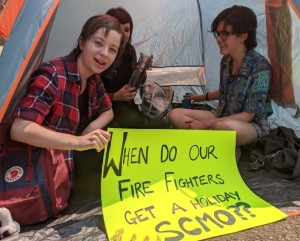 Model Laura Bingle (now Worthington) reprised her Where the Bloody Hell are You? advertising campaign role to send a message to prime minister Scott Morrison.

The prime minister has been criticised for leaving the country, without announcing it, for a family holiday at an undisclosed location while Australia faces a bushfire crisis.

Bingle's tweet to her 106,000 followers included hastags #AustraliaBurns and #AustraliaFires with the line: Scott Morrison : WHERE THE BLOODY HELL ARE YOU???

M&C Saatchi created the $186 million Where the bloody hell are you? campaign in 2006 when Scott Morrison was managing director at Tourism Australia.

In 2009, Morrison publicly criticised former Victorian police commissioner Christine Nixon for going out to dinner with friends during the Black Saturday bushfires which left 173 people dead.

Treasurer Josh Frydenberg has confirmed Morrison is overseas with his family.

"He’s having a well-deserved break and obviously, it’s been a very busy year,” he says. “He’ll be back at work shortly and then he’ll be off to India leading a delegation to advance Australia’s interests.”

Sydney School Striker Ambrose Hayes, aged 14, said: “We are in the grips of a climate and health crisis, yet Scott Morrison and our Government are nowhere to be seen. We are pitching tents outside his house, in solidarity with everyone who has lost their homes and everyone who is losing their futures to this government’s climate inaction."