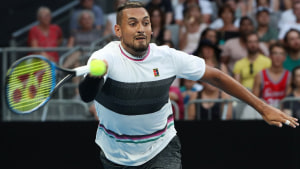 The second evening of the Australian Open has seen a boost in overnight ratings compared to the opening night, with the overnight metro audience reaching 616,000 viewers.

Matches between Australia's Nick Kyrgios and Canada's Milos Raonic, as well as the match-up between the world ranked number one Novak Djokovic and Mitchell Krueger, helped grow day two's evening session ratings by 78,000, compared to evening one.

Despite the resounding win by Djokovic and the devestating loss by Kyrgios, Nine was unable to take control of the primetime slot, with Ten's I'm a Celebrity Get Me Out of Here continuing to build on its success, winning the top spot for the third night straight with 715,000 viewers.

In preparation for the upcoming season of My Kitchen Rules' 10th season and in the absence of a Big Bash game, Seven ran an 'Anniversary Special' featuring some of the best moments from the series, however only managed to draw in 335,000 viewers.

In the overnight main channel race, Nine secured its second win for the week, taking a 22.3% share, with the Australian Open acting as a major contributor. Seven came in second with 15.5%, while Ten trailed in third place with 13.8%.

Over on Foxtel, ratings continued to improved for its latest One Day International series between Australia and India, with the latter winning the second match in the final over.

The tightly fought contest between the two secured Foxtel a viewership of 426,000 and 405,000 for the Post Game coverage and second session, respectively.