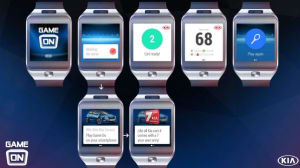 The smartwatch in action

Kia is kicking off its sponsorship of the Australian Open with an interactive 'mobile first' campaign that sees an extended version of its Game On app adopt beacon and smartwatch technology.

From today, across Australia, the South Korean car manufacturer will roll out TV ads that encourage viewers to download the Kia Game On app. The app, created by IPG's Mnet, has been ramped up with expanded capabilities – focusing on social, wearables and beacons.

Supported by television ads created by Innocean Worldwide, the release coincides with Kia’s sponsorship of the Australian Open Tennis tournament which kicks off on 19 January. Initiative handled media planning and buying.

“This year we have significantly enhanced the realism of the experience via many additional features that leverage the latest technology advancements,” CEO of Mnet, Travis Johnson said.

Speaking to AdNews, Johnson said by launching a smartwatch version of the game, this shows that Kia is taking advantage of new technologies in order to maximise brand engagement in the fast moving tech space.

“There aren’t many apps available for wearables, let alone ones that are developed in Australia so we are really proud of this,” Johnson said.

“This also gives the growing numbers of people with these wearables an innovative and entertaining experience. The most successful apps out there are about utility and entertainment and this app has both.”

It is hoped the expanded app capabilities will widen people’s experience of playing and experiencing live tennis in their homes and at events using their smartphones.

Ads to get progressively harder

Once downloaded (or updated from last year’s app) Game On enlists the talents of Australian professional tennis player with the world’s fastest serve, Sam Groth. Players have the chance to try and return Groth’s serve on their smartphones, but this year new capabilities in the app will allow people to review their return shots via a replay, compete against Facebook friends or Groth himself. Users can also put themselves on court with a 360-degree panorama view. Users are then put into a prize draw to be in with the chance to win a Kia.

Last year six TV ads ran promoting Game On, but this year there are seven – which get progressively tougher as the ads are rolled out.

While it's hard to directly attribute exact sales stats to the campaign, Johnson said that simply educating people about the brand was the company goal, not just selling cars.

“There has been some misconceptions about the brand in the past so we knew we needed to show that Kia is forward thinking and innovative. By entering the wearables scene and adding new features such as beacons which allow push messaging at the actual event, this demonstrates that Kia is aggressive in this space,” Johnson added.

“The app is far more immersive this year with added social elements allowing people to ‘boast’ about their scores on Facebook, an added quiz and more, plus people attending the Australian Open in Melbourne will also receive offers, exclusive opportunities, information and alerts via beacons deployed around the Tennis precinct.”

The more times people play, the more entries they will have to win a brand new Kia Cerato car. People can also request advert notifications to ensure they are at the ready when the ad is shown on TV. Users can play on YouTube too.

Mnet owns the patent for the game and Johnson confirmed that it is already in talks with Australian and overseas brands about using a similar format, but expanding to other games such as basketball.

Game On 2014 was one of the most downloaded Australian apps for 2014, topping the iTunes and Playstore charts. It achieved an average of 15 minutes of engagement and millions of swings. It also won more than 20 awards globally including multiple Spikes, Media Federation Awards and Best In Show at the Mobile Marketing Association's APAC Smarties.

Johnson, who is who is the former commercial director at IPG Mediabrands, said Australian marketers and brands need to stop thinking mobile last, and plan mobile campaigns – not just have mobile as an 'accidental' strategy.

Will 2015 see more brands trying to capitalise on apps and improve their mobile offerings? And what do you think of the Kia app? Sign in or comment as a guest below.

You can download the Game on Apps from the appstores. Either search for Game On or click the below link from your phone:

Links for: Apple phones, Android phones and you can return serves here.

Is mobile only an 'accidental ' strategy for Aussie marketers?