Kegstarter: Hahn launches incubator to prove beer can save innovation 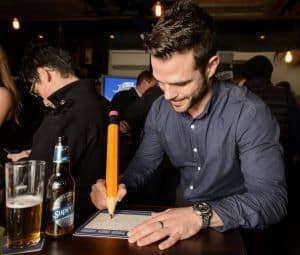 Some of the best ideas in the world were made by beer. And four blokes sitting around having a few beers, discussing how they could do it better is how Hahn was born.

It's from these four ingredients that Hahn has launched JumpStart, a competition that encourages mates to collaborate - and pocket $20,000 to turn their idea into a reality.

Hahn brand director, Tanya Marler told AdNews: "I think the beauty of this program is that Hahn has come from those roots itself. Our four founders thought 'why can't we do that for other people?'.  I think it's critical for the next generation of entrepreneurs”, she said.

The winning group will also receive ten hours of mentoring sessions with entrepreneurs well versed in the convoluted path of bringing a product to market.

Hahn isn't the only brand trying to harness entrepreneurs and start ups, Modelez and five of its brands, Cadbury Dairy Milk, Marvellous Creations, Cadbury Favourites, Philadelphia cream cheese and belVita breakfast biscuits are currently working with five start-ups for a 90-day program to speed up and scale existing mobile ideas.

Campaign ambassador Jack Delosa, with a few successful businesses under his belt, told AdNews that he got involved after thinking about how many ideas die in their infancy. “It's an initiative such as Hahn JumpStart that will give people that window of opportunity, whether they win or not, to think through an idea and maximise their chance of putting it into action,” he said.

Delosa also said that while start ups need the two things that Hahn JumpStart is offering - money and mentoring - it also helps having a brand name behind an idea as well.

“When you're starting out in business you lack something that's really important, credibility.” he said.

“So if you can put a brand name like Hahn next to a business plan, and say we've got their tick of approval, that will take you a long way in getting customers, getting investors, gaining the staff you need. You can leverage off credibility.”

Ideas can be submitted at hahnjumpstart.com.au until 12 September 2014, with Delosa and a panel of experts selecting the final winners on 3 December 2014.

Find out more about the Hahn story below: