Jennifer Aniston takes off for Emirates in $20m ad push 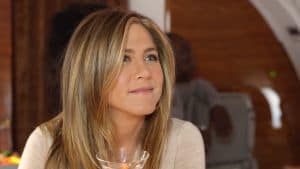 We've all been there, it's 30,000 feet, you're stuck in row 45 crammed between an obnoxious kid who has their headphones up too loud and a man with a serious snoring problem.

While you'd kill for a stiff drink and a shower, most of us have to endure this hell for another 10 hours however, luckily for Jennifer Aniston, her travel nightmare is but a dream and after a brief encounter with some very unsympathetic airline staff she wakes up in the comfort of her own private suite in the Emirates First Class cabin.

This is the scenario in the latest global ad push for airline Emirates, with the aim to show how flying should be.

Hollywood actress, Aniston who is also director and producer don't you know, fronts the push and this marks the first time Emirates has collaborated with the international star for a global digital and TV campaign.

In order to make sure the ad is seen, Emirates has, to date, invested US$20 million in securing TV spots worldwide for this campaign, which will have a 30-second and longer 60-second version.

Boutros Boutros, Emirates’ divisional senior vice president, corporate communications, marketing and brand, explained that Aniston’s appeal and effortless connection with a global audience made her the perfect choice for its campaign.

“In a departure from the usual airline industry ads, we chose to take a humorous approach to showcase the amazing products we offer on board. We couldn’t think of anyone better suited for the role than Jennifer Aniston and we wrote the script with her in mind. Her professionalism and comedic talent shone on the set and we are very pleased with the outcome,” he said.

The TV spot was directed by industry veteran and Oscar-nominee Bryan Buckley, who is acclaimed for his numerous Super Bowl ads. RKCR/Y&R London developed the concept while the script was a collaboration between the agency, Buckley and Emirates’ in-house advertising team.

The global digital and television campaign will begin in the US and the UAE before being rolled out in November to other countries where Emirates has a big operational presence – including the UK, Germany, France, Italy, India and Australia.

This isn't the first time an airline has relied on some star power and some expensive seats to boost sales with Etihad Airways bringing in Nicole Kidman to plug its global 'Flying Reimagined' campaign.

Want to wake up like Aniston? To fly from Sydney to London first class it will set you back a little over AUD$15,000 this time of year.

Watch the spot and tell us what you think: