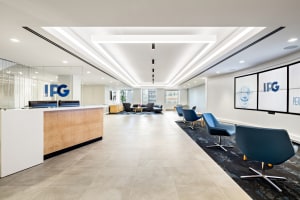 The Interpublic Group (IPG) has recorded a steady increase in year-on-year revenue for the first half of 2018, despite other major industry holding groups falling short of their forecasted targets.

This was comprised of an organic net increase of 4.5% in the US and 5.1% internationally.

IPG CEO and chairman Michael Roth said the company was "extremely pleased" with the results, highlighting the importance of the company's accelerated growth internationally and updating the company's projections for net revenue in 2018.

Roth added that one of the key factors behind the strong year-on-year growth was its "exceptional" performance in media and across its creative-led integrated agencies.

"This breadth highlights the competitiveness of our offerings, the talent of our people, the expanding value of our data and analytics practice, and our ability to bring collaborative open architecture solutions to market," he said.

"Our results year-to-date, coupled with our expectations for the remainder of the year, have led us to increase our organic growth target, and we now expect to deliver net revenue organic growth of 4 to 4.5% in 2018."

IPG stated it remained committed to furthering its long-term record of margin expansion with 60 to 70 basis points of improvement, as targeted coming into the year.

Roth also pointed to the group's current performance and long-term strategy as significant factors that will continue to further "value creation" and "enhance shareholder value".

Locally, IPG's Mediabrands has been on a good run over recent months, with the Australian Government handing its circa $150 million master media agency services contract to UM and The Government of Western Australia appointing Initiative to part of its $60 million account, joining the government's media agency panel with longtime partner Carat.

Last month UM was appointed to Nestlé Oceania's Australia and New Zealand account for its portfolio of brands, managing the $50 million media account.

Globally Initiative also scooped up the account for make-up giant Revlon, which also saw the business move to the agency locally.

The holding group is the first out of the international players to score a win in its announcement of first half results, as rivals Publicis and Omnicom were both hit by losses after revealing their results last week.

Publicis Groupe reported a decline in year-on-year revenue in the first half of 2018, but an improvement in its operating profit margin. The communications group reported half-yearly net revenue of €4.28 billion (A$6.77 billion), down 8.2% in US dollar terms on H1 2017.