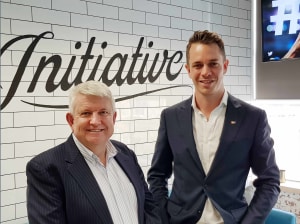 Initiative has begun to reap the benefits of its internal transformation over the past 12 months, following a repositioning as a 'cultural branding' agency last year.

Beginning in May 2017, the agency revealed a rebrand, alongside a promise to mix short-term performance with long-term strategic outcomes.

This strategy also included a refocusing on people and culture internally, with the intention to lower its agency churn rate and increase its people scores.

Leading the charge is Initiative's Scott Laird who joined the company in 2017 as director of people and culture. At the the time, CEO Mel Fein said the role would "underpin" the agencies transformation.

Laird admitted that Initiative had become too focused on the transactional nature of the industry and this was contributing to churn rates.

His first objective at the IPG-owned agency was to lower the "unsustainable" churn rate, which at the time was around the industry average of 27%.

Over the past 12 months, Laird has developed a "three pillar" approach to re-designing the agencies culture, which includes Navigate, a mental health improvement strategy, Nurture, tackling the work/life balance and Normalise, creating an inclusive and supportive workplace.

As a result, Initiative became the first media agency in Australia to partner with the national Pride in Diversity program.

Since incorporating the "three pillar" strategy, Laird said the agencies churn rates are "significantly below" the industry average at roughly half that amount.

"We can't, as an agency and industry, accept the status quo and these numbers shouldn't exist. With the level of staff shortage that currently exists throughout the sector, we simply can't afford to accept it," Laird said.

"Employees are saying we don't want to work for organisations that don't have a purpose and similarly clients want to partner with agencies that actually have a positioning and stand up for something and have a really strong corporate social responsibility program."

Over the past 12 months, Initiative has been appointed to the media panel for the Government of Western Australia alongside Carat, worth $60m, while its Sydney office won accounts including Revlon, Under Armour and John Cootes.

The agency also retained one of its long-standing clients, Officeworks, roughly worth $25m.

Laird said the agency's success over the course of the year is directly linked to the internal changes, adding that clients are looking for security when they appoint an agency, with a consistent client team a must.

"If we look at the pressure industry churn takes on a client team, using the industry's average, that's about a third of your organisation every year of replacing," he said.

"When you bring that down to an isolated client, then that's a significant amount of movement especially factoring in at the time it takes to replace and onboard new staff."

Next on the agenda, Laird would like to see the end of the "over glamourisation" of the "work hard, play hard" stigma within media agencies.

Agency leaders need to change the way the job is perceived to drive a better, more sustainable, work ethic, he argued.

"We're guilting ourselves out of believing in our work by constantly using this terminology that 'we don't save lives'," Laird said.

"We almost glamorise that and I don't think that's a good thing for us to be doing. We need to be able to look after our people and support them in the way that we need to.

"Of course when you take the statement literally it's true, but what it effectively does is reduce the efficacy of the work that we do. We forget that we have a real ability to partner through our unique relationships with our clients to impact positive change."