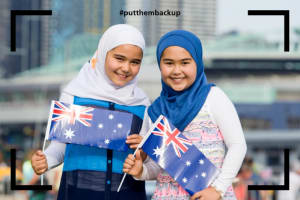 Update: Digital and print billboards have been booked across Victoria from Friday through to Australia Day. There are also plans to book Australia-wide at billboards, newspapers and transport advertising options."

A crowd-funding effort to reinstate an Australia Day billboard featuring two young girls in hijabs has raised more than $130,000 and is continuing to receive donations. "This is just the tip of the iceberg as we are looking Australia-wide at billboards, newspapers and transport advertising options,"

The ad, hosted on a QMS billboard in Melbourne as part of a Victorian Government campaign, was taken down yesterday following threats to both the outdoor company and the Muslim girls featured in the image.

In a statement to AdNews, Minister for Multicultural Affairs Robin Scott says the digital advertising campaign uses a number of images of Victorians from various cultural backgrounds – all of whom are proud Australians.

“While the ads have since been removed, anyone who considers this a victory needs a refresher on the true meaning of Australia Day. It’s very disappointing to see a small minority attacking proud Australians for their love of their country,” he said.

The billboard that sparked backlash on social media

Campaign Edge executive creative director and Gruen regular Dee Madigan is behind the GoFundMe campaign to reinstate the billboard. The campaign started off with a goal of $20,000, which it increased to $50,000 when it saw the money pouring in.

Following the success of the crowd-sourcing, Madigan was able to book an ad in the Sydney Morning Herald tomorrow featuring the hijab-wearing girls.

Talking to AdNews, Madigan explained that she felt it was time to take a stance against the bigots who only represent a small part of Australia.

On the GoFundMe page, Madigan says the more money the effort raises, the more places the ad can run. She is currently talking to media buyers to look at supplying full page press ads and a billboard.

"What we see in the media reflects what we think Australia looks like. If we only see white, middle class faces in advertising - then that's what we think our country looks like," she says.

"There needs to be more diversity in casting and that will come from diversity in creative teams. It is very much still a private school educated, white, blokey industry and if we are able to diversify the creatives, we'll get better work and ads that are truly reflective of Australia."

Madigan has placed a call out to media owners who would be willing to run the ads a discounted rates or fees. Companies or organisations willing to donate $1500 or more will have their logo featured on the ad.

"This is just the tip of the iceberg as we are looking Australia-wide at billboards, newspapers and transport advertising options," says Madigan.

"We have had some great offers from billboard companies and as a start we have booked Victorian digital and print billboards in Preston, Collingwood, Springvale, Endeavour Hills and Yarraville. We will keep you posted with locations and where you can see the ads, thanks again for your support."

You can donate here.