Huffington Post Australia goes live – a day ahead of schedule 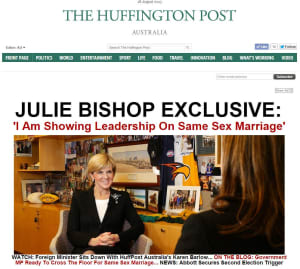 The Huffington Post's Australian offering has surprised many by hitting the live button on its website a day ahead of schedule.

Leading the site currently is a story with Deputy Leader and Foreign Minister, Julie Bishop, on her stance on gay marriage, as well as other stories on things to do in Sydney, The Bangkok Bombings and a story on the numbers of people in the workforce.

To launch the site, co-founder and editor-in-chief Arianna Huffington penned a blog post saying she is excited to announce the launch of The Huffington Post's newest international edition.

“This marks the 15th edition in our growing global network, and brings HuffPost's trademark approach to news, opinion, entertainment and community to yet another continent. It also means we're now present on six of the seven continents,” she said.

Huffington explained that HuffPost Australia will be dedicated to producing original reporting about the critical issues that Australians face, and is tasked with telling stories that focus on helping Australians live more fulfilling lives, while opening up its blogging platform to voices from all across the country to start a conversation on the topics that matter to Australians most.

“When I visited Australia last year, I was overwhelmed by its sheer vastness and beauty. It is a country like no other - in fact, it's a continent, a country and an island all in one...Despite its sunny weather and its inhabitants' sunnier disposition, Australia faces many challenges familiar to the rest of the world.

“One theme we especially look forward to exploring is Australia's work culture. With one-third of the Australian workforce working on the weekends, stress and burnout are critical issues the country is facing. So in our coverage we will be shining a light on how Australians work now - from the big picture politics and policies down to how these impact Australians' daily lives,” she continued.

HuffPost Australia is a joint venture between Fairfax and The Huffington Post in this market with plans for the sites launch being in the works since February this year, with CEO Chris Janz being named a month later.

Most recently the site has been bolstering its editorial staff, who will be lead by editor-in-chief Tory Maguire.