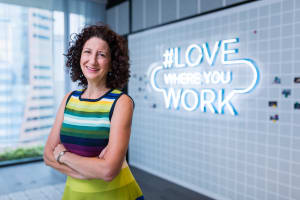 It’s no secret that 2016 was a challenging year for Twitter, reporting its slowest revenue growth since it went public four years ago, losing Australian MD Karen Stocks and axing 9% of its global workforce. However, the company has big plans this year to make a comeback, streamlining its advertising offering and refocusing on its point-of-difference as a live platform.

“It was the year we refocused, streamlining our products to spark growth in consumers and creating one main advertising channel to reach out to agencies and content partners,” Knox says.

When asked about how Twitter hopes to combat the negativity that surrounded the business last year, Knox understands the platform has some damage-control to do, but says its audience growth is under appreciated.

“Of course headlines can get us in trouble, but advertisers are more concerned on what engagement you can offer,” she says.

“If you go by quarters, in 2016 we had three, five, seven and 11% audience growth. It's not only growth it is re-accelerate growth.”

In Q4 of 2016 Twitter continued to grow its daily audience. In Australia its daily average users were up 8.3% and the daily minutes spent on up 10.4%, according to sources.

At the end of last year Twitter to simplify its offering to advertisers, Twitter consolidated its content including Moments, search and featured live video streams into a new tab called “Explore”. Through this move, it hopes to win back ad dollars after it faced declining ad revenue last year.

“Our point-of-difference is our real time, live and conversational content. That is how we offer value to both users and advertisers,” Knox says.

An example of this was how Seven West Media used Twitter during the Australian Open coverage, which Knox says increased video views by four times.

These videos provided inventory for sponsors to get involved with pre-roll ads, including William Hill, ANZ, Kia, Campari, Gold Coast Organising Committee and This Australian Life.

Another way Twitter is appealing to advertisers is a new function launched last week, which helps businesses personalise their direct messaging conversations on the platform.

Knox says Twitter is focusing on creating tighter relationships between sales and content, which proved successful last year with its integration with TV.

“TV is part of what makes Twitter different to other social media platforms,” Knox says.

“As more viewers cut the cords with traditional TV, more advertisers are interested in live streaming. Because of this we are doubling down on live video and creating more inventory for brands.”

Last year saw Twitter significantly up its video output, embedding Periscope within its ecosystem. The company has also been making strides in the streaming space, scooping the rights for Melbourne Cup, NFL and the PGA Tour.

Most recently Myer took advantage of Twitter's live offering through Periscope 360 to launch its Autumn/Winter fashion range. The broadcast had more than 200,000 viewers and Knox says the Myer CEO Richard Umbers was “delighted” with the results.

In Australia, brands got on board with Twitter during popular programs such as The Bachelor, using the platform to engage with viewers, including Dyson, Menulog and KFC.