How to win gold in the digital Olympics 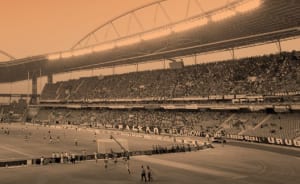 The rise of the second screen means the 2016 Rio Olympic Games will be the most watched in history, but a report from AppNexus says it's technology that will change the way viewers consume it.

The report, Win Gold in Digital Olympics, looks at the role digital advertising will play in the world's foremost sporting event.

With 76% of the global population are expected to watch the events, amounting to more than 5.6 billion people, there is a huge opportunity for brands to get in on the action but the report says the way people are consuming the content will be different.

“Nowadays, people are not tuning in for the whole event; they’re staying long enough to experience micro-moments,” the report says.

“They’re sharing their six-second videos on Vine, following highlights and commentary on Facebook, and watching videos on YouTube. Simply put, they’re everywhere - and not always in front of the television.”

The report says this increase in 'snackable' content is also the key to targeting a millennial audience. It says 45 million millennials will watch 667 million videos within the next 24 hours and that creating short-form Olympic content will maximise the potential of reaching this audience.

Millennials are also more likely to share human-interest and cultural aspects of the game than non-millennial viewers.

In addition, the report looks at the importance of social media in keeping audiences engaged throughout the Olympics broadcast. It says that 33.9 million social media follows will use multiple devices to watch the games, generating over two billion impressions across Facebook, Twitter and Instagram.

It means the Rio Olympics will be the most watched games in history with the rise in second screen strategies from broadcasters around the world. In Australia, Seven Network holds the rights to the Olympic Games coverage and is offering free live-streaming on its dedicated app with 600 hours on demand. Behind a paywall there will be up to 36 different streams that will show almost every sport that takes place

It also announced yesterday that it has partnered with Samsung to deliver 100 hours of live and on demand virtual reality and 360-degree video from the Rio Olympic Games, with chief revenue officer Kurt Burnette noting that the games “will be accessible to every Australian and promise to be the largest aggregated audience ever seen across platforms and screens”.