How MTV got millennials to vote for James Mathison using Facebook 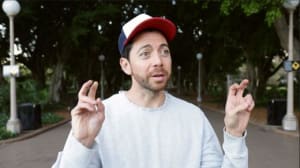 James Mathison and the MTV crew managed to rally a generation of disenfranchised millennials to challenge Tony Abbott for his seat on the Warringah electorate using Facebook.

Earlier this year, when news first broke Mathison would be running against the former prime minister for a seat he held for 21 years, the internet thought the former idol host was having a laugh.

While Mathison ultimately lost the seat to Abbott, he won 12% of the votes on the day and generated millions of video views across MTV's platforms.

"If you can't pick up your camera and go shoot what's being talked about online, you're doing it wrong," he said.

Speaking at the Millennials Marketing Conference today in Sydney, Yeldman explained that after the initial video was launched announcing Mathison would be challenging Abbott, MTV veered from its content plans to create a reactive video.

The video, below, borrowed the format of “Mean Tweets” from Jimmy Kimmel’s show. It featured Mathison reading some of the harsh commentary he received on Facebook.

“It’s fine to borrow from formats you know that work for millennials even if they have been used before,” Yeldham said.

“Just because an idea has been done doesn’t mean it’s not worth doing if you can make it authentic.

MTV recognised Facebook has a hold on the video-watching millennial audience and therefore the platform played an important role in the campaign.

This meant Yeldham had to “feed the beast” and create video content specifically for Facebook. Mathison said he was shocked when he was told 70-80% of people watched his first video with the sound off.

“What I learnt was we had to create messaging with meaning but we also had to obey by the rules. That was the way to achieve depth and meaning at the same time,” Mathison said.

Overall the video content achieved 1.4 million organic video views and engagement rate of 4.5%. Following the success of the push into the political space, MTV will focus more on politics and social issues in 2017.

“The win for us in this series was being able to be inspirational. MTV isn’t a political brand but by feeding the beast and saying f*ck it, go for it, we made information that mattered to millennials,” Yeldham said.