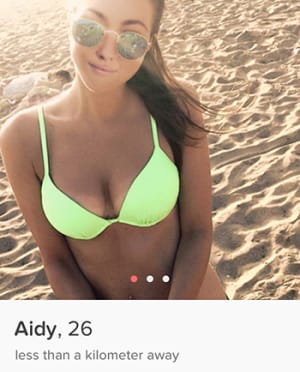 Last week Hero Condoms launched a campaign on Tinder with the aim to help educate young Australians to be prepared for sex. However, sexual health campaigners were quick to call the ads the "biggest marketing fail," saying the ads stigmatise people with HIV and AIDS and contain an “incredible amont of misinformation and lack of science”.

Hero has now apologised, saying: "We sincerely and unreservedly apologise for any offence that may have been caused by our genuine efforts to communicate the safe sex message."

Hero explains there may have been "misunderstanding" generated from the individual representation of AIDS, and the company is "very much aware" of the social challenges that people living with HIV have to overcome. You can read the full apology at the end of this article.

The profiles that caused the most offense, Aydes and Aidy, offered jokes about HIV and AIDS.

Aidy’s profile reads: “I’m a positive kind of girl who likes to have fun. Knock knock. Who’s there? AIDS.” 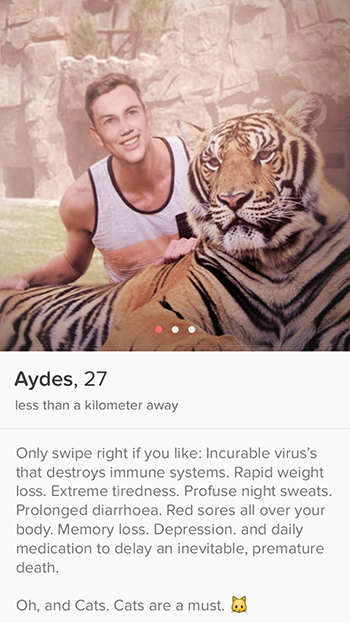 Hero's Facebook page was slammed with backlash from users: 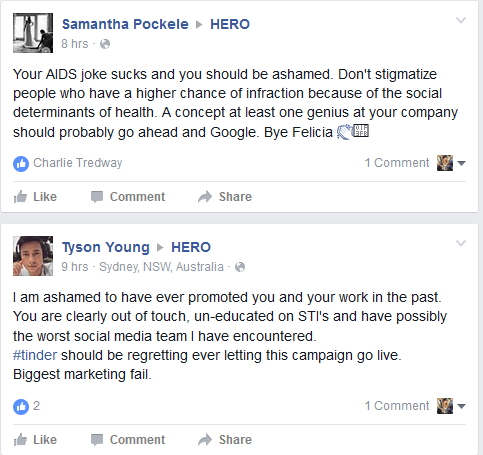 The campaign has now ended as Hero says it was only a six-day activation.

On Facebook Hero wrote: “We have carefully listened and noted all social media feedback and are liaising with leading community experts to help ensure we effectively achieve our objective of improving sexual health."

Read the full statement from Hero below:

"We are aware in any social media campaign which is pioneering in nature, such as our recent Tinder safe sex awareness exercise, that there may be some misunderstanding or opinions generated from some individuals where they are representing or acting on behalf of groups or otherwise.

We are a socially responsible business which has been actively involved in assisting communities living with HIV/AIDS since our inception in 2013. To date, we have donated 575,000 condoms to the people of Botswana and approximately 60,000 condoms locally in Australia and New Zealand to medical faculties, universities, LGBTQI events and other organisations aimed at educating in prevention, management and treatment of HIV/AIDS and other STIs.

We are very much aware of the social challenges that people living with HIV have had to overcome, in dealing with stigma and discrimination, both in Australia and in Botswana, where 1 in 4 of the sexually active have HIV/AIDS. Our STI safe sex awareness campaign was formulated with no intention of offending anyone. With this in mind, we were naturally disappointed that some of our latest efforts were misinterpreted, as this certainly was not our intention. We sincerely and unreservedly apologise for any offence that may have been caused by our genuine efforts to communicate the safe sex message.

Feedback has suggested that information in the profiles was inaccurate and we apologise for the lack of clarity and sensitivity in discussing the prognosis for anyone who has or knows someone who has suffered from AIDS. The symptoms stated in all of the profiles do, unfortunately, describe what can happen if the various STIs are contracted and untreated. This is important information for young Australians to understand.

This campaign was directed at individuals ages 18-25 and one of the most poignant and surprising outcomes was that, despite seeing names of common sexually transmitted diseases, as well as details about the symptoms they result in, users did not seem to realise the profiles were artificial. Health officials are constantly striving to engage with young people about the potential consequences of unprotected sex and this was the intention of the campaign.