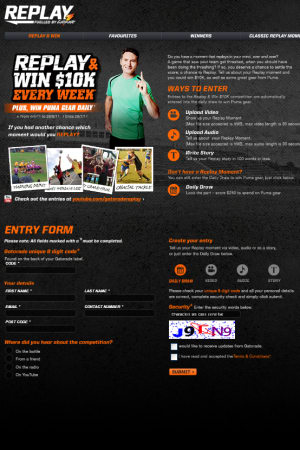 Sports drink Gatorade has launched a social media-fueled marketing campaign that asks consumers to replay their favourite sporting moments in a bid to drive sales.

Gatorade's 'Replay' initiative involves an on-pack promotion, a partnership with Nova and a digital push through this site and presences on YouTube, Facebook and Twitter. Consumers are asked to replay their sporting moment online through using either video, audio or as a story.

The competition, which finishes at the end of June, gives away $10,000 in prize money each week to entrants as well as Puma sportsgear. DDB and PHD are the agencies behind the campaign.

Melanie Kay, executive director at PHD, said the campaign was aimed to “find a different way to engage with consumers”. A similar 'Replay' initiative has been run by Gatorade in the US in previous years, but Kay said the Australian effort is “quite different”.

Nova personalities Dave Hughes and Fitzy have been enlisted to spruik the campaign, while Gatorade brand ambassadors Tim Cahill and Mitchell Johnson were also used. Cahill and Johnson will be replaying their own sporting moments for the Socceroos and Australian cricket team.