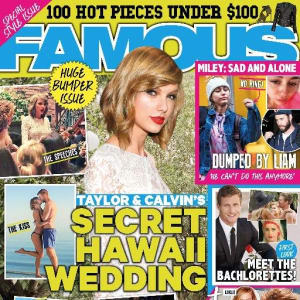 Pacific Magazines has announced it will cease the print publication of Famous Magazine, refocusing its resources to launch a new digital brand, FamousLive. The current issue, on sale today, will be its last.

Pacific Magazines CEO Peter Zavecz says: “The decision to cease publishing in print is never an easy one and we sincerely thank the Famous staff for their contribution to the brand. After much consideration, we feel that refocusing on a digital only model with FamousLive is the correct one.”

The closure will affect 25 staff, Zavecz tells AdNews, with hopes to redeploy 10 into new roles at FamousLive.

FamousLive is targeted at “social and mobile obsessed millennials”, taking advantage of the 260% social growth of the Famous brand in the last 24 months that asses an average social daily reach of 6.3 million.

The platform will feature a “refreshed visual identity” including a 360 degree virtual reality video launched through a partnership with consumer electronics company 360Fly.

Zavecz says Pacific Magazines is committed to the millennial market, with the launch of FamousLive tapping into new levels of “immediacy, innovation and social currency". He tells AdNews the website is being showcased to advertisers in coming weeks, with the targeted reach into the sought after millennial market being attractive to many commercial partners.

FamousLive was designed and built by a Pacific in-house team, led by head of digital and innovation, Darren Kerry.