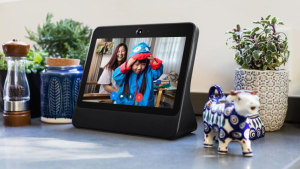 Facebook has launched its first hardware product set to compete with Amazon Echo and Google Home.

Unlike its competitors whose main focus is voice activation, 'Portal' is a smart display centred around its video chatting component.

Aimed to make video calls a more natural process, Facebook’s virtual assistant is being marketed to provide a personal feel.

One of Portal’s main selling points is that it tracks the user’s movements and allows the user to chat without the need to hold a phone up for an extended period of time.

“Everyone was like: ‘You’re nuts. The whole thing is just about smart speakers and just voice,’” VP of the portal hardware team Rafa Camargo said when speaking about the decision to incorporate video chat into the device.

The launch of Portal was initially pushed back, following ongoing issues surrounding data privacy and trust, in particular the Cambridge Analytica scandal.

Camargo said the Facebook team attempted to “build privacy from the ground up and on every layer of the stack” when developing the Portal.

“This is something in your living room or kitchen. There should be no surprises on it, period,” marketing lead for Portal Dave Kaufman says.

“You should know that you have full control over everything you’re saying.”

Portal has music and video streaming services through Facebook Watch, but users cannot browse Facebook or perform other functions, and this is said to be done in efforts to protect user privacy.

The device comes with a camera cover, similar to the one that Mark Zuckerberg uses on his own computer, along with a deactivation button that Facebook guarantees cuts off all recording and the content of all video calls are said to be encrypted.

Part of the gadget’s appeal is that it was developed with an Oscar award-winning cinematographer to develop a wide camera angle that pans and automatically detects its users and fits them in the frame, being sold as an augmented reality experience.

Portal’s prerequisite is that the user must have Facebook or Facebook Messenger, and is scheduled to be available for purchase in the US in November.