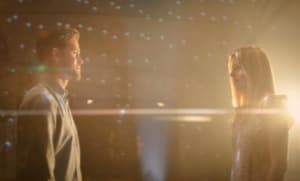 Dating service eHarmony has taken the brand in a new direction in its latest advertising, with new marketing lead Nicole McInnes aiming to honour the essence of the brand while pushing it into a new space, with a new agency.

McInnes joined the business from Pandora four months ago and since landing behind the desk discovered that there was “rich territory” for the brand to play in when it came to selling its service, that didn’t revolve around the traditional humour of the sector.

“People think Australians respond really well to humour and they do, but the truth about finding love is that it pulls on the heart stings and we wanted to take the brand there,” McInnes told AdNews.

“eHarmony is the only brand that can really go there with substantiation and without seeming like its trying too hard... As a brand we're different, so we needed to look different”

The new campaign illustrates the spark that people can feel on first dates, and was created by recently appointed agency, The Glue Society.

Previous ads for eHarmony were created by Kalido, but since joining McInnes has changed up the creative agency model, pitching one latest concept out as a project. Working with agencies on a project basis allows the brand to get the best agency for the job depending on the channel that is being used, she says.

“The great thing about project based work is you can get the best agencies for the best channels as you need them, and not rely on one agency to be great at everything.”

“I really feel strongly that Glue Society are near the top when it comes to TV and creative ideation, so it leaves it open to me to find out who's the best at social, viral and influencers. There's whole new territories that we haven’t really explored and by not having one big agency on retainer we're able to be agile and move and change as new channels evolve,” McInnes explained.

The current campaign is running across TV, as well as on digital and social, however McInnes also flagged that the brand is set to dive more into experiential. The business is set to host an activation in November, which will put its matchmaking algorithm to the test with 15 real life couples, seeing if they can find the 'spark', which is referenced throughout the campaign.

When it comes to the metrics that McInnes is watching for surrounding this campaign, she outlined that while the campaign needs to tick off the business objectives, such as sign-ups, she's also watching to see if this new push moves the dial for the brand as a whole.

“I’m really interested to see how consumers react to the brand and its products – so I’ll be looking at brand metrics as well as direct response metrics.”