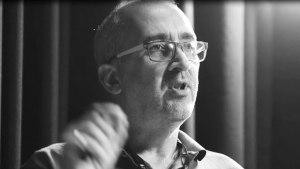 Melbourne-based strategist Eaon Pritchard has released his second book, Shot By Both Sides – What We Have Here Is A Failure to Communicate.

It's a follow up to his 2018 book, Where Did It All Go Wrong? - Adventures At The Dunning-Kruger Peak Of Advertising.

Among the questions posed and (almost) answered in the new book:

To promote the book, he's been hitting social media platforms, including LinkedIn

He says: "90% of my sales last time were from US so I hope to get out to New York later in the year."

"It’s a book about two worlds: the art world and the wacky world of business communications: each with their impenetrable languages, pretensions, flamboyancies, angst and unbearably pretentious wankers.

"Shot By Both Sides imagines each of these worlds having a sensible conversation with each other in the hope that they may find peace, or at least answers to their own particular lunacies."