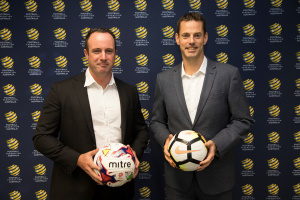 The five year partnership will see MKTG commercialise the FFA Digital Network including the "My Football Live App", also leading the commercial strategy and operations for the network.

As part of the FFA Media Powered by MKTG deal, MKTG will provide FFA with a complete and end-to-end digital marketing solution approach.

The partnership has been created to drive growth of the FFA Digital Network for the benefit of fans, participants, and the Federation’s clubs and commercial partners.

MKTG national MD Matt Connell told AdNews the partnership is for all of the FFA's commercial rights, from elite to grassroots and "everything in between".

"Any opportunity for a partner of the FFA or any other brand who wants to be associated with football, it will be our role to deliver those solutions for them," he says.

"One of the things that is most important is that we deliberately won't be presented to the industry as a seperate entity to the FFA. Our team will be really connected with the commercial team at the FFA, as an extension of their partnership team."

The agency has purchased all of the FFA's digital media inventory as part of the deal, which makes MKTG more of a rights partner as it is a media partner. The way the deal is structured is that both the FFA and MKTG commercially benefit if the agency performs well.

"We are not about just selling display media. We value it and it's important but it's not the thing that is really going to make the difference for our partners. We want to build a solution around best practice in data and thinking about how we can deliver a programmatic offering but also one that is addressable for the FFA's partners and audience," he says.

The launch coincides with the recent announcement of Telstra and Football Federation Australia's (FFA) five-year digital rights and sponsorship agreement, but MKTG has had a relationship with the FFA previously around stadia signage and other services.

AdNews attended the media event, where the telco announced it had secured the live mobile rights for football until 2023.

The deal between is a result of a sub-license agreement between Telstra and Fox Sports, and does not include the 2018 FIFA World Cup, which is licensed to rival Optus Sport.

Under the streaming rights deal, Telstra will create and launch the new “My Football Live App” with live matches available via the Telstra Live Pass for existing Telstra mobile customers, which MKTG will then commercialise.

The streaming itself will be taken from the 'dirty feed' supplied by Foxtel. All advertising that appears in that broadcast will also appear on the Telstra app, similar to what the telco does with its NRL and AFL streaming.

The deal between Dentsu and the FFA follows the launch of stages one and two of FFA’s digital network, with new websites for fans and participants delivering enhanced experiences and interactions with the football community.

“FFA is delighted to partner with MKTG uniting their local experience and the power of their track record of innovation around the globe, to football’s new digital network," FFA head of commercial, digital and marketing Luke Bould says.

"Together, along with the Hyundai A-League and Westfield W-League clubs and Member Associations, we will be able to deliver great experiences to our fans, participants and our commercial partners.”

The FFA is also currently reviewing its agency arrangements, pitching both its creative and media accounts.

BMF and MediaCom are the incumbent agencies on the FFA account. AdNews understands BMF is not involved in the pitch.

BMF has held the account since 2010 and last year, earned a bronze at Cannes Lions for its 'You've Gotta Have a Team' ad.