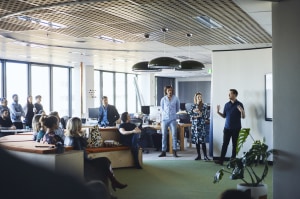 From humble beginnings as a direct marketing agency in 1997 to becoming a fully-fledged CX agency with 75 people, and new in-house and tech offerings on the table, the team at CX Lavender has remained driven by two forces: the customer and collaboration.

While only re-positioning itself as a CX agency in 2015, CX Lavender has had the customer in focus from day dot. Putting the customer first may sound like another agency cliché but for co-founder and CEO Will Lavender and his team, it really does influence every iota of what they do.

This customer-first approach, Lavender says, has led to a unique business model that doesn’t follow in the footsteps of traditional agency set-ups. This is one factor he attributes to CX Lavender’s longevity.

“The central philosophy of the agency is that the customer is our true north,” Lavender says.

“What we’ve done successfully for the past 22 years is – without stifling creativity but actually working in a different way – we’ve held this line.

“To be customer-centric means that you’ve got to continually pull yourself into understanding what the customers feel, and that’s what we do here. It is different, it does lead to a slightly different culture.”

He explains that this model sees CX Lavender sitting somewhere between an agency and consultancy, with a culture driven by collaboration.

This culture reigns through its interactions with clients as well. Over the past 12 months, it has launched a new offering CX Insitu which sees the agency set up in-house for clients.

Linda O’Grady, Business Partner and Data Strategy Partner, says the offering was formed in the wake of changing client needs.

“Through conversations and different skills we have in the business, we started to spend a lot more time talking to clients about their business problems, not just their marketing problems,” O’Grady says.

“We ended up heading into innovation labs and working with them on product design and that kind of thing as well.”

She explains the offering initially began with “pop-up agile” teams but has developed over time to mould into the most beneficial formula for all parties. Westpac Group has been the first client off the ranks to take advantage of Insitu as the bank moves away from siloed departments into a faster and more nimble market.

Despite many people in adland being fearful or disgruntled by the in-housing movement, CX Lavender has embraced it head on. For many creatives, it’s viewed as the antithesis to what they love about their roles.

In today’s dynamic world, Karena says creatives have had to become more business-minded. This shift has helped craft the way staff are trained to work in-house with clients.

Stubna backs her up, explaining that formulating the right model for Insitu meant achieving the perfect balance for not just clients but creatives as well.

“Creatively, it was really working on getting that balance right – you know, creatives not feeling like they’d been shipped off,” Stubna says.

“It was about equipping them with the right skills to go and have conversations with clients, and still feel supported by creative directors and senior creatives back in the agency so they would never not feel part of the Lavender team.”

For Lavender himself, launching Insitu has been a sign of the times as both the agency model and clients’ workflow continue to evolve.

“Clients are letting go of their marketing department ownership because successful in-housing actually involves more of the product teams, the data team, all working together and solving together,” Lavender says.

Insitu is one of a number of ways Lavender and his team are future-proofing the agency in an age where no-one is able to truly predict what will come next. Introducing pureplay tech company CXTX is another.

Like Insitu, this new offering was prompted from customer pain points. Already holding a number of client retainers purely for tech, the agency has now dived into creating its own products.

Setting CXTX up as its own company has also opened up the doors to greater opportunities with clients, explains Clint Bauer, Partner and Head of Technology.

“When you’re working in a vertical within an agency environment, you’ve got a conflict of interest which we have to observe,” Bauer says.

“We’ve got firewalls we have to maintain. Pureplay tech companies can go after a few clients within a vertical.”

As CX Lavender continues to broaden its horizons through avenues such as in-housing and tech, the right talent is crucial to the agency’s success.

Genus is a graduate program founded by Lavender’s wife Tess Lavender. Set to begin its fifth year, the program has continued to grow its intake each year. This year saw eight graduates taken on, while last year it took on six.

“There is a business element to Genus which fits into Insitu. We quickly realise we need large numbers of almost ripening talent to feed this new model. So, Genus works well like that,” Karena says.

“But from before, we’ve always been a mentoring culture as well and got great results out of fresh young people from unexpected places, too – not just out of AWARD School [but] lots of different places.”

With the program continuing to gain more diverse talent every year, Lavender believes they have got it almost down pat.

“Last year’s in-take – and I think the year before – were extremely diverse. I think it’s fair to say we’re not really nailing anybody for tech,” he says.

“I think also our business model customer-centricity, working collaboratively it’s not for everyone and I think Lavender can be quite polarising.”

While he can’t tell you where CX Lavender will be in the next five years, he can say collaboration and putting the customer first will continue to remain top priorities for the company.

For anyone seeking the “rock star” culture that one might find at a traditional agency, Lavender says you won’t find it in his business.

“I used to talk about it as the ducks and the hens. Both birds but different mindsets,” he says.

“I think a customer-centric mindset doesn’t mean you can’t do brilliant things. You can, but you’re just doing it and approaching it often in a different way.

“We strive to do great work but our way of getting to that, it isn’t the brilliance of one person – which I think in the traditional model it often is – it is the actual excellence of many people.”