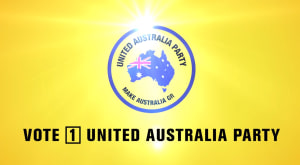 The data from Nielsen, which tracks ads across print, radio and TV, reveals it was not only the UAP’s biggest spending week, but also Labor and Liberal’s as election day draws nearer.

This brings the overall spend since 11 March for Labor and Liberal to $5.16 million and $5.21 million respectively. Meanwhile the UAP has spent $17.395 millionb according to the data, although the party’s actual spend is expected to be significantly higher.

The Greens also had its biggest advertising week, spending $100,000.