Clemenger turns 70: We don’t want to be Ubered 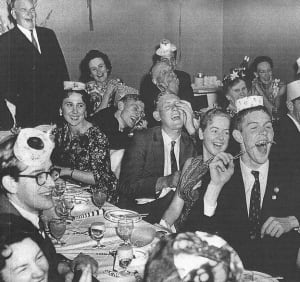 Throwback snap: Jack Clemenger and his team at the Savoy Plaza, Christmas 1960

Clemenger BBDO is marking 70 years this year but it knows that celebrating the history isn’t worth much without looking to the future and Rob Morgan, chairman of the agency, admits “we don’t want to be ‘Ubered’,”

To mark the occasion, AdNews delved into the history of the agency and sat down with Peter Clemenger, who has been with the agency since the day his father started it and whose name is still above the door.

The agency, which was started in March 1946 by John (Jack) Clemenger, is an iconic fixture of Australian adland. It is one of the most awarded Australian advertising agencies still around and winner of the AdNews Agency of the Year accolade seven times – more than any other agency or group in the 30 years of the awards. Clemenger is recognised locally and internationally as a bastion of creativity and campaigns like Yellow Pages’ ‘Not Happy Jan’ is part of Aussie culture. AdNews named ‘The Boys for Bonds’ work Ad Campaign of the Year in 2015. But Peter Clemenger remembers when things were a little different.

“For many years we were the new boys. We seemed to have been around for a long time, but in 1946 there were a number of family–owned businesses that are no longer here – Basil Carden’s Carden Advertising [which later merged into George Patterson] and Hugh Paton’s Paton Advertising Service [taken over by his son Noel in 1946],” he said. “So, for a long time our main aim was survival.”

For a man whose leadership has helped build a $400 million advertising business, Peter Clemenger never planned to be in advertising at all – and didn’t believe he was particularly suited to it.

“I didn’t set out to get into advertising, I basically got pitchforked into it by my father. I enjoyed what I was doing and I certainly worked pretty hard and it would appear I’ve done reasonably well at it. But when I look back on it, if someone had said ‘will he make a success of advertising?’ The answer would have been ‘no’,” he admits.

Reputation and heritage is one thing, but it doesn’t guarantee a successful future and Clemenger isn’t shying away from the fact it has to evolve. The story of Clemenger’s past and the 70 years it’s celebrating in 2016, belongs to Peter Clemenger, but the story of its future is currently being written by a whole new leadership team.

Morgan holds monthly ‘future agency leadership’ meetings with a handful of execs that have been pinpointed as pivotal to guiding the agency through its next decade and beyond. Among them, Chris Howatson, CEO of CHE Proximity, the data and analytics-driven media agency that this year expanded from Melbourne to Sydney, now with more than 50 people in the new office; Nicola Hepenstall, managing director of research agency, Hall & Partners Open Mind; creative chairman, James McGrath, and Nick Garrett, who took over as Melbourne CEO in November last year.

For Garrett, the future of what agencies need to do is clear.

“To ensure that Clemenger [in the future] remains as good as the agency we inherited we have to rewire our systems and our culture. A large part of that is operational excellence. We have to fundamentally look at the infrastructure, the tech and the capabilities of the business to make sure we’re relevant in five years’ time.”

Looking ahead, Peter said the business is in a long distance race and that it’s far from over.

Read the full feature and interview with Peter Clemenger, Rob Morgan, Paul Nagy and Nick Garrett in the print edition of AdNews out today. You can also read it on iPad via iTunes or get it on your Android or Apple device through Zinio using this link.