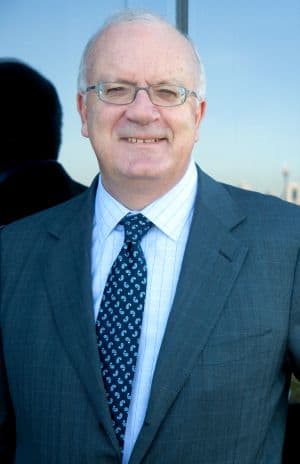 Rob Morgan is the 2014 inductee into the AdNews Advertising Hall of Fame. Here he talks with publisher Jeremy Light about the wayward direction of the advertising industry.

As executive chairman of Clemenger BBDO Robert Morgan sits atop a group of more than 50 companies with a turnover of $1.5 billion employing 1600 people. It's a position he should be accustomed to, since it has been the largest agency group in Australia for a lot longer than the 15 years he has been chairman.

Morgan is typically self-effacing about his success with the company. “The fundamentals that have been the bedrock of the company haven't changed at all,” he says, “and I'm quite proud of that. I inherited some great people and a really fantastic business. The problem wasn't fixing it - from a personal of view it was a matter of not wanting to muck it up.”

In his time at the helm the company has expanded into numerous specialist areas and relentlessly posted record profit results. His juggling of personnel within the group to get the best result, however, is one of his great skills.

Morgan's career started at General Motors, followed by a short stint at ACNielsen and three years at agency Monahan Dayman Adams. In 1979 he joined Clemenger Melbourne as an account executive. Five years later he became a director, and five years after that, Melbourne managing director. As chairman of Clemenger BBDO since 1998 his responsibilities include New Zealand, and he is also on the 17-person board of BBDO Worldwide.

“They're basically saying if they get big enough they can negotiate more – they're leaning on the media operators to finance it. It's wrong.

“With advertising agencies there will always be people who do it cheap to establish a beachhead. That's not going to go away, it's been going on for ever. They come and they go. In Paul Keating's words they go up as rockets and come down as burnt sticks.”

Media agencies are not Morgan's favourite kind of organisation, either. Here he goes again:

“I think with the increase in desk trading and buying online a fundamental change is going to have to happen. The worst thing that happened to our industry was unbundling the media from creative. It is a nonsense in this day of 24/7 communications, where you're on the whole time, to have a disconnect between the channel management and the content management,” he says.

“The clients are fed up with it. The advertising agencies and the media agencies are in some sort of turf war. All that means is there's duplication of costs as they go into a kind of arms race. I think we will see in the next few years it will re-bundle. It has to.

“Even worse there's a whole generation of creative people who have no knowledge of or involvement with any of the media. For instance, if you're starting a new show, why wouldn't you sit down with potential sponsors and work out how to maximise that sponsorship. The media owners say they do that but they don't, they can't.

“I think back to the early days at Clemenger when they used to sit down with Graham Kennedy and there'd be a copywriter sitting next to the presenter of the show working out how they'd integrate the product. How do they make the dog shit on the floor after it had eaten a bowl of Pal. That's what they used to do.

“They're saying now that integration into program is a whole new world, but that's bullshit. That was being done better then than it's being now, but the difference is that the creative people were working with the media. Nowadays I don't reckon any of our people have been to Channel Nine or Channel Seven.”

He is not too fond of the Media Federation either.

“We're the only country in the world where the media agencies and the advertising agencies have two different organisations, which is nonsense, quite ridiculous. That's pandering to the egos of a couple of media buyers.

Media fragmentation has its problems, but on the positive side Morgan believes it means creativity has become more important.

“Nowadays you've got to seduce, inveigle, attract people to listen and watch your message. Once upon a time you could sit there and chuck stuff at them. Now you've got to seduce them. That's why I think the agencies that have creativity in their DNA are going to have a golden era,” he says.

Agency remuneration based on head hours is not working either, says Morgan. It should be linked to sales.

“When the commission system died we all said isn't that great, we'll all have a fee for service and we won't be at the vagaries of spend in media. Well, that was delusional. If they're not doing any advertising the first thing they look to cut is the big fat retainer.”

And what does he think of procurement departments? Not much.

“I look at some of the campaigns we've done. They are fundamental, business-changing, business-galvanising, internal-motivating, game-changing campaigns. But then after you've done all that and everyone's taken the victory parade, the procurement department comes in and says you haven't added much value.”

What about industry associations? No good either.

“What would be great would be some sort of organisation that represents agencies, media and clients... where we would talk about big issues and actually do something. We could run campaigns educating kids how to eat, for instance. We should be doing joint initiatives that on the one hand could be valuable to the community, and on the other hand demonstrates social responsibility. And none of that in any way would be in conflict with anything that we sell. There's huge amounts we could do as an industry if we all got together, as well as protect us from the forces that want to ban advertising. Our industry should be leading in those areas, and it can.

“We should be out there talking about the importance of this industry to the economy. There's a brilliant piece of work done by Deloittes in the UK that says for every pound spent on advertising there was six pounds of economic activity generated.”

So what's good about the industry, and what does the future hold? Talented people. Clemengers has prospered by nurturing the best people, he says, and the industry can too.

“The biggest opportunity and biggest strength of the industry is our ability to attract the best and the brightest. I think new media particularly, and the fun that young people see in creating new communication platforms has attracted an extraordinary wealth of talent.”

Have something to say? Send us your comments using the form below or contact the writer at jeremylight@yaffa.com.au