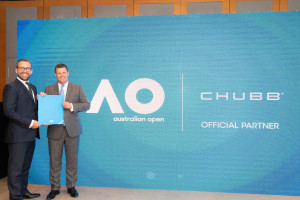 The brand joins as the official insurance partner for the event which takes place in January. Tennis Australia declined to comment on the size of the deal.

“We are delighted to announce our partnership with Chubb, a leading global insurance company with operations in 54 countries and territories”, says Tennis Australia CRO Richard Heaselgrave.

“Chubb’s international growth and profile align perfectly with the Australian Open and we look forward to a productive partnership over the coming years.”

The deal will include brand visibility for Chubb, including on-court and across the precinct signage.

“Chubb is proud to announce our partnership with the Australian Open, the Grand Slam of Asia Pacific,” says Chubb regional president for Asia Pacific Paul McNamee.

“It is a world-class event which encourages inclusion, community service and the pursuit of excellence – all values which we cherish at Chubb.”

“It’s one of the biggest sporting events in Australia, and we’re proud to be on board.”