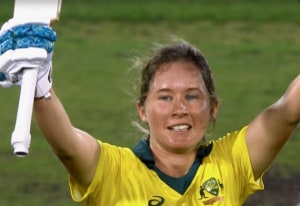 The Australian Cricket anthem anthem C’mon Aussie, C’mon is back, this time for women's cricket.

Commonwealth Bank and indepedent agency GHO Sydney have launched a major campaign celebrating women in cricket with a reinterpretation of C’mon Aussie, C’mon.

The integrated brand campaign highlights female players from the past, present, and futuret. The campaign will run across TV, out of home, radio, digital and social.

Along with the current team, the 60-second TVC includes four cricketing greats -- Betty Wilson, Raelee Thompson, Belinda Clark, and Lisa Sthalekar -- along with up-and-coming cricketer, Gunisha Garg, as part of CommBank’s commitment to nurturing the next generation of female players.

The campaign reimagines the Mojo classic with the original voice of composer and agency co-founder Allan (Jo)Johnston, in a move to encourage all Australians to show their support for the team.

“I never imagined that a song we wrote all those years ago would still be going strong," says Allan Johnston.

"But it’s great to see it being reinterpreted for the women’s team. I know Mo [Alan Morris] would have been just as proud.”

A full-length version of the track will be released on music streaming services with proceeds going to the McGrath Foundation, an official local charity partner of the ICC T20 World Cup 2020.

Australian all-rounder and CommBank Cricket Ambassador, Ellyse Perry: “This is such a legendary song and to think that it’s now been reworked to reflect the Australian Women’s Cricket Team and other historic trailblazers of the women’s game is humbling. What a way to celebrate women in cricket and inspire more young girls out there to get involved in one of Australia’s most iconic sports.”

Monique Macleod, CBA chief marketing officer: “We’ve been working with Cricket Australia to grow the women’s game for more than 20 years and it’s incredibly exciting to see how far the sport has come. Hosting the ICC Women’s T20 World Cup in 2020 as world champions is a huge moment for the team, and we’re so proud to be able to bring this iconic Aussie anthem back for them.”

Eithne McSwiney, managing director of GHO Sydney: “Some people call ‘C’mon Aussie, C’mon’ Australia’s second national anthem. Understanding the impact it had on the men’s game forty years ago, it struck us that singing it for the women’s team was long overdue. It’s their time, and we want to fill all the stadiums during the T20 World Cup to support them. We couldn’t be prouder of the campaign, and we’re looking forward to seeing the impact it will have.”

The TVCs were directed by Aimee-Lee Curran and edited by Gaby Muir, with production by GHO Sydney.

“I loved directing this spot,” said Curran. “It puts women in the spotlight and was made by a film crew with many powerful women in key roles. I hope it will inspire the next generation that they can do it, too."