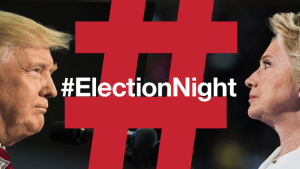 BuzzFeed claimed this was the most-viewed US election related live stream on Twitter, surpassing unique viewer totals for US political convention and presidential debate live streams.

While the viewing numbers are high, BuzzFeed and Twitter count a unique viewer as a person who watches the video for only three seconds.

The set of the BuzzFeed election stream

The short time that registers as a "view" has previously been criticised when BuzzFeed claimed more than 5 million people viewed its exploding watermelon video.

The broadcast had an average minute audience of 165,000 viewers globally, peaking at 244,000 concurrent viewers.

The live coverage attracted a young, mobile audience with 83% of logged-in live viewers under the age of 35, and 73% of all viewers on mobile devices.

AdNews hosted a poll asking its audience how they are watching the election, via social media, free-to-air or PayTV.

How are you watching the US #ElectionNight?

Social media was the clear winner, however, as Mark Ritson noted advertising people do not always reflect the habits on “normal consumers”.

Proof that advertising people are not like normal consumers...this time from @AdNews and election night. pic.twitter.com/0jhbTd0L0q